Heavy loads and slow rotating movements were the challenges when CorPower Ocean was looking for bearing solutions for its world-leading wave energy converter. The first full-scale converter will soon be ready for testing with smart bearings from SKF.

Wave energy is one of the world’s largest clean sources of energy, with the potential to meet 10 percent of the world’s total energy needs. Now a world-leading wave energy project is underway at CorPower Ocean’s facilities in Stockholm, Sweden.

“What makes wave energy particularly exciting is that it has a more consistent production profile and can thus play a highly significant role in the transition to a 100 percent renewable energy system by replacing base power such as coal and nuclear power,” says Patrik Möller, CEO of CorPower Ocean.

CorPower Ocean was founded in 2010, and after several learning cycles it has developed an initial full-scale converter. The converter was tested in the company’s test rig in the summer of 2022 and was placed in the ocean off the coast of Portugal in fall 2022. The goal now is to roll out a finished commercial product on the world market in 2024.

“We intend to become a major Swedish export company that builds and delivers wave energy converters, and we see incredible volume potential for this technology,” Möller says.

One partner in the project is SKF, which joined the project early to provide assistance with the various types of bearings, lubrication and monitoring needed. “We faced challenges at the start – slow rotating movements and extreme loads,” says Jacob Ljungbäck, mechanical engineer at CorPower Ocean, responsible for the design of part of the product.

We see incredible volume potential for this technology. ‍

When Ljungbäck used SKF’s online calculator and fed in the values for loads and rotation speeds, the program returned an “error” message. “I realized I needed a little more help,” he says, “and I contacted SKF.”

Ljungbäck eventually reached Yvonne Rydberg, an application engineer at SKF. Rydberg recalls, “It was a real treat for me, as an application engineer, to be part of this project so early on. If you come in late, there’s a risk that it’s more about problem-solving, but now we were part of it from the beginning and could really contribute our know-how while the concept was being developed.”

In the beginning, there was a lot of close contact by phone and email, and numerous questions arose. To move forward and make real progress, a workshop was organized at SKF in Gothenburg.

“We took a full day to go through the entire bearing – from bearing type, sealing solutions and bearing size to lubrication and installation,” Rydberg says. “We tied up a lot of loose ends there.”

Ljungbäck also found the workshop helpful. “For me, it was incredibly useful to sit down and go through the whole bearing all at once,” he says. “It certainly saved several weeks for us in the development phase.”

During the workshop, the group identified a basic solution that appeared promising and that laid the foundation for a number of models. “In total, we developed four bearing models that we are now testing,” Ljungbäck says. “The idea is to get help from SKF later on and evaluate the bearings in order to find the most cost-effective bearing solution that works for our application.”

At SKF, Rydberg is looking forward to the continuation of the project and emphasizes the value of joining at such an early stage of development, when few parameters have been set. “At that point we can deliver the most value, and the customer really benefits from our collective know-how.”

For customers, close collaboration with SKF at an early stage in a design process yields many advantages:

Wave energy could generate power on a utility scale and be combined with other renewable sources such as tidal stream and wind turbines. It is a potential source of clean power for remote islands and places where no grid infrastructure exists and for offshore industries such as fish farms and oil and gas platforms.

“Wave energy is still one of the greatest untapped green resources of the earth, with a great potential to get commercially harvested in the coming years,” says Michael Baumann, global application account manager for ocean energy at SKF.

The west coasts of North and South America and large parts of the North Sea in Europe are promising areas for harvesting wave energy.

Wave energy technologies such as CorPower are currently less mature than tidal stream turbine technologies. However, the potential of wave energy is much greater than that of tidal energy.

So far, a number of wave energy prototypes have been tested in harsh seawater conditions. Wave energy is in the early stages of development, so the cost is relatively high, but there is significant potential for reducing this. These technologies must prove they can work reliably, with the potential to have a levelized cost of energy (LCoE) competitive with that of offshore wind.

The EU Green Deal initiative, with the Horizon R&D program, is providing significant funding for both wave and tidal technologies. Its first target is to install 100 MW of ocean energy capacity – expanding that to 1 GW by 2030.

For its part, SKF is integrating components from synergistic industries, such as marine, wind, oil and gas and hydroelectric, to overcome some of the technical hurdles of wave energy.

A collaboration between Goldwind and SKF is pushing the frontiers of low-carbon manufacturing in China.
Sustainability,
Sustainability 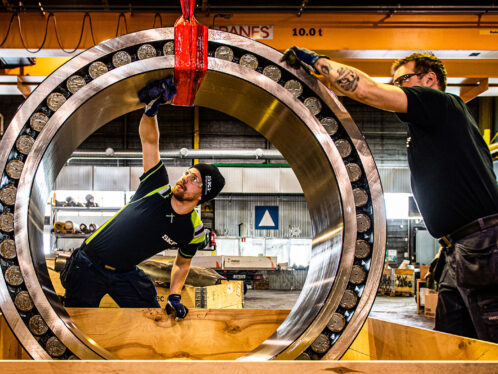 More and more manufacturers are turning to remanufacturing to significantly contribute to their sustainability and circularity goals. With this trend [...]
Bearings,Circular economy,Remanufacturing services,
Engineering Competence