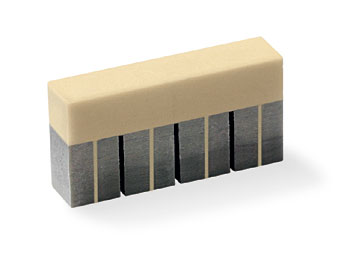 A motor is normally supposed to rotate. Yet a Swedish start-up has developed a revolutionary new motor that walks.

Electrical motors come in all shapes and sizes. Piezo Motor, a small company situated outside Uppsala, Sweden, has used the phenomenon of piezoelectricity to construct the smallest and most precise linear motor, or micro-actuator, in the world.

Piezo Motor’s newest product, Piezo LEGS, is the size of a sugar cube and has a resolution in the nanometer range. It is a sugar cube that packs a punch.

Piezo derives from a Greek word piezin, which means “to press.” Piezoelectricity is the phenomenon by which certain crystals release an electrical current when being deformed by physical pressure from the outside. The opposite is true, too. These crystals will change shape when an electric current is led through them.

Take a walk
Piezo Motor uses these piezoelectric properties to basically “walk” a drive rod through a stainless-steel housing with the help of a current from a nine-volt battery. The piezoelectric ceramic material expands and contracts and lifts and pushes in a motion similar to walking. Piezo LEGS is a motor without moving parts, in the conventional sense, and is thus maintenance-free.

On Piezo Motor’s Web site, the minimalist motor LEGS is compared to an ant in size – only about 1,000 times stronger. Obviously this product is the furthest one can come from a run-of-the-mill electromagnetic motor found in countless appliances from toys to kitchen equipment and automobiles.

“Our linear motor functions like a dog going on a walk,” says Per Oskar Lithell, CEO of Piezo Motor. “Each of our piezoelectric elements has four legs that ‘walk’ two-by-two when electricity is applied. And they can take the tiniest steps. That’s what is interesting.”

Traditionally, a linear motor uses a screwing mechanism to transfer a rotating motion into a linear one – to push or pull, in other words. This works in certain applications where space is no constraint. Coming down in size for smaller applications, such motors are bulky, as they require gear and clutch mechanisms. The amount of moving parts also created precision problems, especially at small amplitudes.

A long drive
With a piezoelectric linear motor there is no rotation, and the pull and push precision of the drive rod can be controlled and measured in nanometers. In fact, on lower settings the motion of the aluminum oxide drive rod on Piezo Motor’s latest demo unit is invisible to the naked eye. At its lowest setting, the drive rod can take an hour to move 0.7 of
a millimeter (0.03 of an inch).

But turn up the frequency and the rod will zip along at 20 millimeters (0.8 of an inch) per second, with a force of eight Newtons. In other words, despite weighing only 20 grams (0.7 of an ounce), this motor can push or pull with a force equivalent to lifting 800 grams (28 ounces).

“Our idea is to be a complement to what is already out on the market,” says Lithell. “And to find a niche where other motors don’t work. We are in the segment of nanometer tolerances.”

Innovative capital
Piezo Motor is the brainchild of Stefan Johansson and Mats Bexell. Bexell worked on his PhD in micromechanics at Uppsala University under Johansson, who still holds a professorship at the university. In 1995 the pair developed a piezoelectric rotating micromotor that was four millimeters (0.16 of an inch) in diameter and four millimetres long. In 1996, the pair won the prestigious Dagens Industri Innovation Cup awarded by Sweden’s leading financial daily for their work.

It didn’t take long for the pair to see a commercial angle to their innovation. With the help of venture capital, Piezo Motor was founded in 1997. Since then the company, which currently has 11 employees, has kept a very low profile to tweak out the piezoelectric properties it needed to create a linear motor.

“For the first couple of years we have concentrated on the technology,” says Lithell. “We want to expand, but carefully.”

Piezo Motor is based in an industrial park outside of Uppsala. There the company has a test laboratory, a prototype workshop and manufacturing facilities. The piezoelectric material it uses is bought as a ceramic powder and then processed in-house. The company currently holds six U.S. patents, with more on the way.

In November 2002, Piezo Motor made its official debut at the SPS IPC Drives fair in Nürnberg, Germany, where many new contacts were made. Lithell says, however, that the company’s linear motors are already being tested by a host of Swedish and American multinational companies.

Some possible applications of piezoelectric motors, says Lithell, include dosing systems for various industries. In the biotech sector, a piezo motor could be used to utilizean egg, for example. Or to mount components on printed circuit boards.

The need for microelectric motors is getting greater all the time. Whatever the application – aviation, medical equipment, automobiles, laboratory instruments, telecommunications – electric motors and surrounding components are getting smaller and more precision-oriented.

“The precision demands on this kind of equipment are huge,” says Lithell. “Before, it was common to use traditional electromagnetic motors. But because these are mechanical, there is always a little play in the system that makes them less precise. Our motors have resolutions down to the nanometer level. Plus, we don’t need clutches or gear boxes.”

Once things start rolling, Piezo Motor has no intention of building off-the-shelf products. Because applications for their technology are so specialized, their business plan is to build tailor-made motors for their customers.

“It is hard for us to have a product portfolio,” says Lithell. “Every project is specific to a customer. But at least we have shown that it can be done.”