» NOT FOR EVERYBODY! The Venturi Fétish 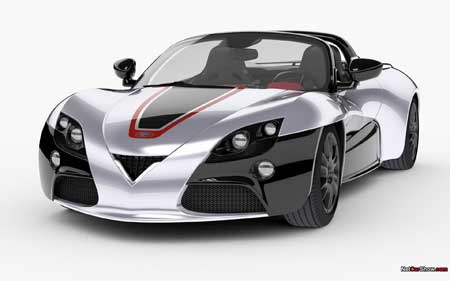 Fétish facts
The Venturi Fétish has no gearbox; rather it has a forward-neutral-reverse switch. A reduction gear turns the rotation of the 220 kW electric motor (it turns at up to 12,500 rpm) into a manageable rate at the wheel. SKF bearings are installed in this critical component and in the front wheels. Technical details of these bearings are confidential. “We draw on SKF’s in-depth knowledge of calculating bearing life and other vital performance parameters,” says Venturi’s owner and president, ­Gildo Pallanca Pastor. “We deal with SKF Racing, who are experts in a highly specialized area. SKF is also responsive, and they have plenty of experience in ­electric motor applications.”

To boost brand awareness, the company, based in Monaco with a subsidiary in the United States, undertook a series of challenging missions: to set new records while demonstrating the reliability, energy efficiency and robustness of its vehicles under extreme conditions.
There are TWO world speed records, ratified by the International Automobile Federation. In September 2009, the Venturi Jamais Contente, with an electric drivetrain fed by fuel cells, flashed over the Bonneville Salt Flats in Utah at 303 mph. The following year, the same vehicle (known as the Buckeye Bullet, but with batteries instead of a fuel cell) bettered its own record with a speed of 308 mph.

To meet the second challenge, a very different Venturi-powered vehicle set another record in 2010. It was a mass-produced Citroën Berlingo. A Venturi electric powertrain was the only thing that set it apart from standard production models with an internal-combustion motor. It traveled from Shanghai to Paris, nearly 8,700 miles, a record distance for an electric vehicle. The two-and-a-half month drive took it across the Gobi desert amid sandstorms, over 9,500-foot-high mountain passes in snow, and along rugged roads in Kazakhstan – a real proof of robustness.

After grabbing two world speed records and dramatically proving its motors’ rugged reliability, Venturi has more cards to play. When it comes to acceleration, few cars do better than the Fétish, Venturi’s luxury sports model. A VM300 electric motor, which develops 220 kW power and 380 Nm torque, propels the sleek vehicle from a standstill to 62 mph in four seconds. That puts the Fétish in the same league as the big “muscle cars” such as Ferrari and Lamborghini.

First seen in 2004 at the Paris Motor Show as a Concept Car, the latest Fétish was rolled out in 2010. The motor is located centrally behind the driver as in Formula 1 racing cars. The monocoque chassis is of carbon fiber and aluminum honeycomb, and the bodywork is carbon fiber. Two deformable compartments, one at the front, one at the rear, provide a high level of safety for the occupants in the event of an accident. Total weight is 2,700 pounds, of which the 54 kilowatt-hour lithium-ion battery, at 990 pounds, accounts for more than a third. With a new battery-management system developed by Ventec, another company owned by Pastor, the Fétish has a range of 210 miles.

“The Fétish is not a mass-produced vehicle and never will be,” says Pastor. “It costs 300,000 euros [$430,000], and we are aiming at an exclusive clientele. It is handmade to order, and production is limited to 10 cars per year. Every car is customized to the buyer’s specifications.”

Gildo Pallanca Pastor and Venturi Automobiles
Gildo Pallanca Pastor, who once tried his hand as a racing driver, was born in 1967 in Monaco, the world’s second-smallest country (after Vatican City). That makes him a Monégasque, as the natives of this tiny country are called. Its total population is 31,000, of whom only 6,000 are native Monégasques. He is a strong advocate of venture capital and financing innovation. Building on a fortune created by his property-developer grandfather, in 1998 he founded the Monaco Business Angels Forum. In addition to Venturi, he owns or has a leading role in some 20 companies and organizations.