» The attraction of magnetic bearings 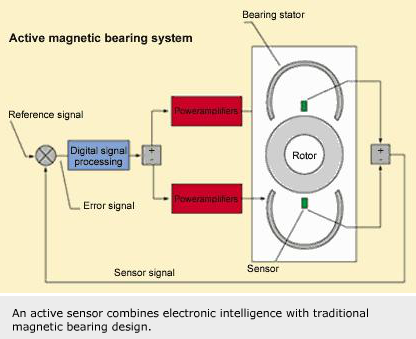 The attraction of magnetic bearings

Active magnetic bearings are set for appreciable growth in the next few years. SKF has formed a strategic alliance with a leading Canadian company, Revolve Technologies Inc., which has resulted in the creation of a new company to develop active magnetic bearing products.
The active magnetic bearing is a relatively new type of bearing that combines sophisticated sensor technology with mechanical design. As a result, it offers high-speed applications with a new level of control, previously impossible.
Because such bearings do not require lubrication, they have potential in futuristic applications such as aircraft engines, where weight is critical, or in environmentally challenging situations.

Active magnetic bearings mark a new era in combining electrical and mechanical systems. They offer considerable benefits in extreme high-speed applications such as machine tool spindles and turbo compressors.SKF has ventured into the relatively untapped world of mechatronics – a realm where the boundaries of mechanics and electrical systems are increasingly blurred. The active magnetic bearing represents an innovative product range for the group and can provide solutions to complicated problems.
The principle of magnetic bearings is simple and well understood. A shaft hovering freely in a magnetic field is supported only by the magnetic forces induced by the surrounding magnets. This simplest type of bearing uses permanent magnets. Passive refers to the fact that it is not possible to alter the properties of the bearing, such as the strength of the magnetic field, during running.
By replacing the permanent magnets with electromagnets, for example, and adding a sophisticated digital control system, this passive design is transformed into an entirely new product – the active magnetic bearing. Now it is possible to control and alter the bearing’s properties according to the needs of the particular application and the environment in which it operates. The bearing becomes an active part of the application.

Operation
The active magnetic bearing comprises two parts – the mechanical and the electronic. The mechanical parts of the bearing are similar to an electric motor with a rotor and stator. An iron core in the stator is wound with coils through which the electric current that induces the magnetic field is fed. This generates the forces that support the shaft.
The electronic part of the active magnetic bearing is the digital control system. It includes sensors that measure the exact position of the rotor. Even the slightest deviation from the desired position will trigger the software in the control system to adjust the current flowing through the electromagnets that determine the strength of the magnetic field. The currents are adjusted according to a set control algorithm that corrects the deviation.

Speed and control
The fact that the shaft hovers freely in space, without contact with the stator, means friction is minimal. That opens up the opportunity for the bearing to run at exceptionally high speeds. For a magnetic bearing, the doubling of the shaft speed when compared with conventional rolling element bearings appears to represent little problem. In addition, the contact-free environment means that no lubrication is required, however fast the speed. Without the need for lubrication, there is the opportunity on occasion for an overall saving in total bearing weight, despite the fact that magnetic bearings may be heavier than their rolling bearing counterparts. In addition, “no lubrication” represents a benefit to the environment. The contact-free conditions offer, in theory, almost infinite life for an active magnetic bearing, because of the absence of wear.
The automatic control system provides the user with a powerful tool for controlling the bearing’s operating characteristics. The bearing may be optimised automatically by adjusting running conditions. External factors such as an outside force can be easily and automatically compensated for. This avoids the shaft falling out of position and resultant bearing breakdown. In addition, bearing vibrations can be eliminated, critical speeds can be handled and the density of the magnetic field, and thus the strength of the induced magnetic forces, can be monitored as well as measured.
The magnetic field is dependent on the current flowing through the coils. The larger the current, the stronger the magnetic field and the load it is able to support. The load an active magnetic bearing is able to support is very high.

Promising future
The existing annual market for magnetic bearings is valued at around 50 million U.S. dollars. Industry analysts have forecast significant growth during the next few years. SKF is taking an active part in the development of this type of bearing as it becomes part of the group’s range of bearing products. The group recently acquired a 40 % stake in Revolve Magnetic Bearings, a new company set up in alliance with Revolve Technologies Inc., a Canadian company that is a leader in the development, manufacturing and marketing of magnetic bearings.
“With this alliance, we have the combined strength and reputation necessary to establish us clearly as the world’s leading supplier of this technology,” says Kim Sturgess, the new chief executive officer of Revolve Magnetic Bearings.
Since active magnetic bearings differ significantly from conventional bearing designs, there are opportunities in main application areas for SKF to offer products that bring new, key benefits such as outstanding speed capability and control.