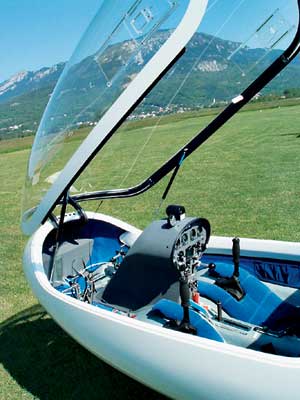 A clever design enables aircraft manufacturer Pipistrel to deliver a range of ultralight aircraft with a unique side-by-side seating. Enjoy a shotgun trip in the Taurus!

Pipistrel is a small Slovenian company making big waves in the world of ultralight aircraft. In its headquarters, in the small town of Ajdovšina, a world map hangs on the office wall of the company’s founder, boss and chief test pilot, Ivo Boscarol. An irregular red line runs across the map.

“This line shows the 47,100 kilometer [29,260 mile] route that one of our aircraft, a Pipistrel Sinus, took to fly around the world in 79 days,” Boscarol explains. “It was the first-ever solo round-the-world flight in an ultralight motor glider.”

“And,” adds Matevz Lenarcic, pilot of the historic flight, “the 79 days include the 14 days I was held up in Russia, plus eight days in Mongolia, for reasons that had nothing to do with the aircraft’s airworthiness.

“The Sinus is perfectly suitable for long-distance flights like this,” he continues. “I used less than 2,000 liters [525 gallons]of fuel for the whole distance.”

An ultralight aircraft is one that weighs less than 450 kilograms (about 990 pounds) at take-off, including pilot, passenger, fuel and luggage. The Sinus and its slightly smaller brother, the Virus, are the world’s first ultralight two-seater motor gliders.

“Motor glider” sounds like a contradiction in terms, since “pure” gliders are normally towed into the air behind a powered aircraft, then released. Motor gliders are ultralights equipped with motors that are powerful enough to enable these aircraft to take off without towing. At a sufficient height, the pilot stops the motor and starts gliding and soaring on updraughts, just like a pure glider. He also has the option at any time of restarting the motor to gain height.

Motor gliders, some people say, are against the spirit of gliding; others say they give pilots a false sense of security. But many argue that a motor makes the aircraft safer because, with it, a pilot can avoid storms. Moreover, a motor glider can fly farther at any given moment than a pure glider, which helps the pilot to avoid an out landing – that is, a landing away from home base, probably in some field that is flat and clear enough to permit it. After an out landing, possibly a long way from the starting point, a retrieval crew with a vehicle is required to haul the glider and its pilot back to base. This can be a time-consuming and expensive operation.

The Sinus and the Virus are made of composite materials: epoxy resin reinforced with glass, carbon or Kevlar® fiber. Among the many innovations these aircraft incorporate, one runs contrary to accepted practice in ultralight aviation design. The pilot and passenger are seated side by side.

“With side-by-side seating for the two occupants, the Sinus and the Virus, as well as our new baby, the Taurus, are unique in the ultralight class,” says Boscarol.

“People thought we were crazy when we adopted this approach,” he adds. “Of course, side-by-side seating requires a wider fuselage, which means more drag, which means a loss in performance. But with our clever design, the loss is insignificant, except for competitive flying. On the other hand, the gains are great.

“With this type of seating, the pilot interacts far better with the passenger,” Boscarol continues. “The controls are, of course, fully duplicated, so the side-by-side arrangement is excellent for teaching and learning to fly, whether gliders or powered aircraft. And, worth noting, our cockpits are designed for what I call today’s ‘fast-food generation’: It makes no sense to design a super-slim plane that flies incredibly well if your potential customer weighs around 130 kilograms [285 pounds].”

The latest in Pipistrel’s stable of ultralight motor gliders is the Taurus. On some 200 hours of successful test flights, the prototype aircraft was piloted on several occasions by Boscarol, as well as by other test pilots and potential customers, before it was returned to the workshop. Here it was completely dismantled, so that the fuselage could be used for making the mould from which the production model would be made. “The first serial-produced Taurus will fly in late 2004,” Boscarol says. “Then we shall make one a month during the first half of 2005, two a month during the second half and probably four a month starting in 2006. However, we shall never mass produce any of our aircraft. That’s not our style. We make each one by hand, and with a lot of love.”

Like the Virus and the Sinus, the Taurus provides side-by-side seating. But whereas Virus and the Sinus have the motor conventionally placed in front, the Taurus has its 50 horsepower Rotax motor situated in the fuselage, behind the cockpit. The motor drives a propeller that is at the end of a moving arm. For take-off, or whenever the pilot wants to use it in flight, an actuator pushes the arm into the vertical position, where the belt-driven propeller can turn freely. When power is no longer wanted, the pilot stops the motor, the propeller automatically locks into alignment with the supporting arm, and the actuator retracts the arm into the fuselage. A door closes onto the opening through which the arm passed, so that nothing is visible from the outside, and the Taurus looks and performs like a pure glider.

Some significant figures: the wingspan of the Taurus is 15.2 meters (about 50 feet), the fuselage is 7.17 meters (about 24 feet) long and the craft weighs 279 kilograms (615 pounds) empty and 450 kilograms (990 pounds) at maximum take-off weight (MTOW). The fuel tanks in the wings hold 30 liters (8 gallons). The maximum speed permitted is 205 kilometers (about 125 miles) per hour and the all-important “best glide ratio” is 1:41, which means that in smooth air the Taurus can travel 41 meters (135 feet) while losing 1 meter (3.3 feet) in altitude. That is about five times better than a classic ultralight aircraft. At MTOW it takes off in 115 meters (about 375 feet).

Ajdovšina, where Pipistrel is situated, is just over an hour’s drive from Ljubljana, the capital. “This is where I come from,” Boscarol says. “Ajdovšina is unusual because it has had an airfield for nearly a century. Flying is in my blood. I started flying radio-controlled models as a boy, and I built my first real aircraft, a trike, in 1985.” A trike is a tiny aircraft, consisting essentially of a wing rather like that of a delta glider, a seat suspended below it for the pilot, a small motor and propeller, and three wheels – hence the name. While trike production continues today, Pipistrel (the name, deriving from Latin, means small European brown bat) now concentrates on the Sinus, Virus and Taurus ultralight motor gliders. “We also have another aircraft in the pipeline, which we shall call the Arkus,” Boscarol says. “It will still be in the ultralight class. It hasn’t flown yet, but we calculate that it will have a top speed of more than 400 kilometers [250 miles] an hour.”

Boscarol, who won the title of Entrepreneur of the Year 2003 in Slovenia, has little time for leisure as most people understand that word. “The cockpit is my playground,” he says. “I love to test each new aircraft myself, including the prototypes. For me, flying is a drug. And if flying is a drug, test-flying is a hard drug – especially when you test the results of your own work.”