The world’s first subsea gas compression plants are helping Statoil reap increased recovery, cost and environmental benefits by getting to the bottom of its reservoirs.

Extracting oil and gas from the bottom of reservoirs has been an intractable problem for the oil and gas industry. Companies have tended to move on once the challenge of extraction became too great. Now, thanks to Statoil’s new subsea gas compression system, it is possible to recover deep oil and gas cost-effectively.

The Norwegian energy company’s two new subsea gas compressors are the first of their kind in the world. Resting on a seabed in 300 metres of water in Statoil’s Åsgard field, they maximize gas recovery and look set to significantly prolong the lifetime of production in the Midgard and Mikkel reservoirs.

We chose SKF for its strength in bearings. It is the only company on the market with such a qualified product.

Recovery from the two Norwegian Sea reservoirs is expected to increase by at least 20 percent, adding more than 300 million barrels of oil equivalent to the field’s output. Without the new solution, the reservoirs would have closed down prematurely.

Traditionally, gas compression has taken place on platforms or onshore at a distance from the source. Situating a compressor as close to the well as possible is a more energy-efficient alternative. It saves space, cuts down on the need for maintenance and, because it is unmanned, can be operated remotely, and removes the need for constant supervision and personnel.

Moreover, there are impressive environmental benefits. The subsea compressor requires some 40 percent less power to operate than traditional solutions, and it significantly reduces the CO2 emissions of a field.

With the new solution, compression equipment is waterproof – sealed in leak-proof tanks that provide a much more protected environment than in the past, says Torstein Vinterstø, Statoil’s project director for Åsgard. “Onshore or on a platform, equipment is exposed to the elements, dust, humidity and temperature fluctuations, but the seafloor provides a more stable environment – a constant four degrees Celsius.”

It’s taken a big effort to get everything right under time pressure and money restraints, and SKF has supported us and has done their utmost to deliver.
Torstein Vinterstø
Statoil’s project director for Åsgard

The Åsgard subsea gas compression plant project was some 10 years in the making, requiring an estimated 11 million man-hours from start to finish. But Statoil was willing to make a long-term investment, says Vinterstø. “Being at the forefront of technology both for cost-cutting and environmental reasons is important for Statoil and our partners,” he says. “We realized that we needed to think differently when it came to the technology and turn every stone to bring down costs and cut our CO2 emissions.”

Up and running 300 metres down
International energy company Statoil started the world’s first-ever subsea gas compression train in its Åsgard field in September 2015. A second train is now in production in this Norwegian Sea location. With such game-changing technology, additional gas volumes can be recovered from the field’s Midgard and Mikkel reservoirs, extending the lifetime of fields and consequently increasing recovery.

Statoil
Headquartered in Stavanger, Norway
Operations in more than 30 countries
22,000 employees worldwide
Biggest activities are on the Norwegian continental shelf
Listed on the New York and Oslo stock exchanges
www.statoil.com

The subsea system might never have succeeded without the contribution of suppliers such as SKF, says Vinterstø. “We chose SKF for its strength in magnetic bearings,” he says. “It is the only company on the market with such a qualified product.”

The two companies worked closely on the complicated magnetic bearing technology that is integrated inside the compressor casing (see fact box). Engineers from both SKF and Statoil often worked side by side in what Vinterstø calls a “very efficient” working process. “SKF came up with ideas and suggested ways to achieve the right quality,” he says.

“We had a lot of discussions, which gave them a better understanding of our needs and led to a better result.”

Getting the technology to meet a host of regulations was a time-consuming process, and SKF was faced with an enormous challenge, Vinterstø says. “I honestly think that SKF was brave to continue with us,” he says. “It’s taken a big effort to get everything right under time pressure and money restraints, and SKF has supported us and has done their utmost to deliver.”

Now, says Vinterstø, it’s time to capitalize on the success of the subsea technology, share it with others and apply it in new locations.

When Statoil decided to put together the world’s first subsea gas compression facility, it turned to various suppliers for technological support. SKF was one of them.

After five years of intense development and testing, including simulating underwater sea conditions above ground in 6,000 hours of continual operation, SKF’s magnetic bearing solution was finally ready for the depths of the Norwegian Sea.

The magnetic bearings are integrated inside the compressor’s casing, eliminating the need for lubricating oil, seals and a gearbox. The frictionless bearings enable higher rotational speeds, leading to lighter compressor modules and infrastructure. “We learned a lot with the Statoil project, which moves us up in terms of technology and gives us an edge over the competition,” says Jérémy Lepelley, sales manager, Subsea and Oil & Gas Developments, at SKF Magnetic Mechatronics. 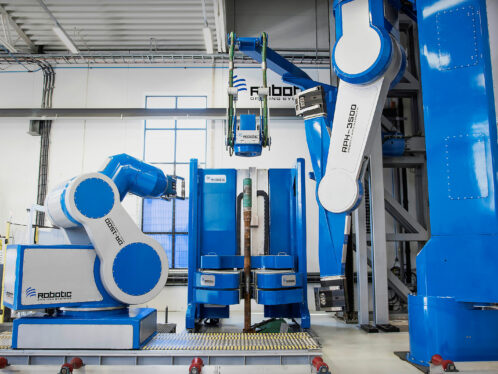 Robots in the oil-drilling arena

Norwegian robotics company Robotic Drilling Systems A/S is changing the face of oil drilling with robots that can substitute for humans on the most [...]
Mining and mineral processing,
Industry