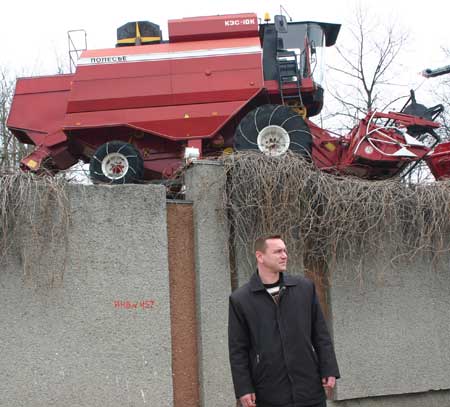 The company, a government-owned enterprise, was established in 1930 in the industrial town of Gomel, some 300 kilometres southeast of Minsk, the capital of Belarus. It started by making the simplest kinds of agricultural equipment, such as horse-drawn ploughs and harrows, says Belykh. During World War II (known as the Great Patriotic War in the countries of the former Soviet Union), 1939-1945, the factory was evacuated, lock, stock and barrel, to Kurgan, near Omsk in Siberia, where it was able to go on working for the needs of the Soviet army. It returned to Gomel in 1944. Today 18,000 employees work in five factories there. The company also has assembly plants in two Russian towns, Bryansk and Svetlogorsk.

Gomselmash manufactures some 40 different types of modern agricultural machinery, including ploughs, mini-tractors, beet and forage harvesters, mower conditioners, windrowers, machines for sowing tree seedlings and other agricultural equipment. The output in 2007 comprised some 2,400 motorized and 4,000 towed units. The company also produces parts and machinery under contract for other companies. “We place great emphasis on innovation,” Belykh says. “Three to five new models are introduced each year. Some of them are developments of existing ones, while others are completely new designs.”

The endeavour to increase exports brought its own difficulties. One of the most important problems Gomselmash engineers had to solve was how to improve the competitiveness of the company’s products, in particular their reliability.

What does the future hold? Valeriy Sandalidi, SKF’s business manager in Belarus, is confident. “In the last few years our business in Belarus has been growing at 20 to 30 percent a year,” he says. “We intend to maintain this, although competition is getting ever tougher, not only on price but also on delivery. Gomselmash is our most important single customer in all 11 countries of the CIS region, and we will work hard to keep it that way.”