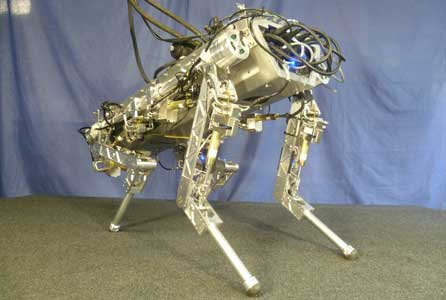 Scientists in Italy are developing a robotic horse to go where humans dare not tread.

For centuries people have ridden horses to explore the world. Now a special horse is learning to explore the world without a rider. An inter­­­­­national group of scientists at the­ ­Istituto Italiano di Tecnologia (IIT) in Genoa has developed HyQ (the name is short for “hydraul­ic quadruped”), a 150-pound robot designed to navigate hostile terrain and dangerous situations not suitable for humans or animals. Applications include rescue missions, construction sites and contaminated environments such as nuclear power stations and chemical factories.

Each of HyQ’s four legs comprises two joints with SKF bearings that are actuated by hydraulic cylinders and one joint that is powered by an electric motor.  These joints enable the horse to walk, trot at speeds of up to six feet per second, jump, kick and even rear up – all fluid, horselike behaviors. Also, much like a real horse, the robot can travel over uneven ­surfaces and autonomously adjust its pace to overcome different-sized objects in its path.

HyQ is still missing a head, but Claudio Semini, the researcher responsible for the HyQ pro­j­ect, says a planned head will incorporate a stereo camera and laser range finder for navigation and mapping. Eventually, scientists also want to add a manipulator arm to the body – an unhorselike attribute akin to adding a robotic rider.