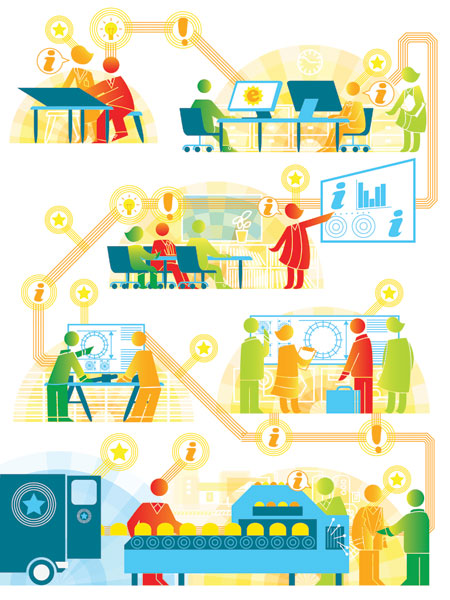 Around the world, business leaders are increasingly focusing on the concepts and criteria of business excellence as a way to lead their companies through the 21st century. Evolution takes stock of the trend.

American management consultant Joe Muzikowski likes to use the centuries-old Indian fable about the blind men and an elephant to help people get their minds around the modern concept of business excellence. “Like those blind men, if you see only the disparate parts of an organization you make decisions based on limited information,” says Muzikowski, an ISO 9,000 lead auditor, a Six Sigma master black belt and a former senior examiner for the Malcolm Baldrige National Quality Award, one of the most highly prized recognitions of business excellence in the world. “To me, business excellence is looking at the big picture and trying to perform at very high levels in every aspect of an organization,” he says. “It might sound easy, but it is in fact a very difficult balance to achieve.”

Over the past 25 years, companies around the world have been walking – or have attempted to walk – the esoteric tightrope known as business excellence. Unlike the dozens of standardization approaches such as ISO standards and Lean that focus strictly on products and processes, business excellence is both a framework and a mindset aimed at helping companies make the best possible use of modern management principles and production tools to achieve maximum performance. “I think business excellence is best described as a holistic vision that aims to improve process quality and market success and create an ongoing passion for learning,” says Harry Hertz, a research chemist and organizational expert and the director of the Baldrige program, the gold standard for the concept of business excellence in the United States and around the world.

The Maryland-based Baldrige program, named after former U.S. Secretary of Commerce Malcolm Baldrige, was created in 1987 under the National Institute of Standards and Technology, which is itself part of the Department of Commerce, as a national education program to help U.S. manufacturers become more productive and competitive in the marketplace. “Americans finally woke up to the fact that the Japanese were eating our lunch,” says Muzikowski, speaking from his home in Houston, Texas. “We needed to improve, and Baldrige was part of the solution.”

From the start, the program’s primary function was to help manufacturing, service and small business organizations in the U.S. gain a competitive, customer-focused edge through the development of the Baldrige Criteria for Performance Excellence. According to the group’s website (www.nist.gov/baldrige), the criteria provides organizations with a framework for performance self-assessment in seven categories, including leadership, strategic planning, customer focus, measurement, analysis and knowledge management, workforce focus, operations focus and results.

“Initially our focus was on improving product and process quality like ISO, Lean and Six Sigma do now,” Hertz says. “But we have really evolved over time.” In addition to expanding to organizations beyond the business sector – including education, health care and nonprofit groups both in and outside government – Baldrige is now squarely focused on promoting overall business excellence and “the learning and sharing,” says Hertz, “of successful performance practices, principles and strategies.”

The Malcolm Baldrige National Quality Award, given annually to organizations that have shown themselves to have an outstanding system for managing their products, services, human resources and customer relationships, is a cornerstone of the program.

Applying for a Baldrige Award involves a rigorous evaluation and feedback process. Some 1,500 companies have applied since the inception of the program in 1987, but thus far only 91 organizations have received the award. What these companies have in common, according to program organizers, is “a role-model management system that ensures continuous improvement in the delivery of products and/or services, demonstrates efficient and effective operations, and provides a way of engaging and responding to customers and other stake­holders.”

Notably, the first recipient was Motorola, which gave the world Six Sigma, a business culture change concept that Hertz describes as a hybrid mix of standardization tools and Baldrige’s criteria for business excellence. “Six Sigma got picked up by Jack Welch and General Electric and went global,” he says. “But Baldrige was the basis for it.”

Five companies have earned the distinction of being two-time recipients of the Baldrige Award. A recent study of these two-time winners showed that they created 20 times more jobs and enjoyed 93 percent higher revenue growth than the median in their respective industries in the years between award wins.

Since the start of the Baldrige program, similar business excellence programs and models have sprung up in many Western countries. The most prevalent is the privately funded, Brussels-based European Foundation for Quality Management (EFQM), which boasts more than 500 members in 55 countries and 50 industries and bills itself on its website (www.efqm.org) as “the custodian of the EFQM Excellence Model, a business model that is helping over 30,000 organ­izations around the globe to strive for Sustainable Excellence.”

Founded in 1988 by the CEOs of 14 multinational business giants, including Electrolux, Nestlé, Fiat, KLM, Philips, Renault and Volkswagen, EFQM describes (and hands out awards for) business excellence according to eight Baldrige-like fundamental concepts that include focus on customer values, continuous learning, partnership development and public responsibility.

“Business excellence criteria provide a good framework for assessing performance,” says Rose Almon-Martin, vice president of performance excellence and brand for MEDRAD. A subsidiary of Bayer Healthcare, which is itself part of Germany’s Bayer AG, MEDRAD manufactures and sells medical equipment such as fluid injection systems for radi­ology and cardiology and equipment for visualization procedures such as computed tomography and magnetic resonance imaging. The U.S.-based firm is a two-time (2003 and 2010) Baldrige Award recipient.

In addition to helping improve performance indicators for the company at almost every level, Almon-Martin says, the application of business excellence principles enables an organization to raise production and performance processes to a whole new level. “You get a lot of efficiency when people are on the same page and share the same vision,” she says. “It cultivates a tremendous sense of teamwork and pride and forces you to think way beyond profits.” The SKF Bridge of Business Excellence
As director of SKF Group Business Excellence, Claes Rehmberg has spent the past three years in charge of a veritable culture change that is sweeping the organization in every corner of the globe.

Rehmberg remembers the last time SKF underwent such a revolutionary makeover. It was the late 1980s, and SKF was looking for ways to streamline manufacturing operations. The company adopted the Lean production model.

“We switched from a batch production operation to a channel concept,” recalls Rehmberg, a mechanical engineer who started working at SKF’s massive complex in Gothenburg in 1975. “The company channelized all of the 90 factories around the world and improved and refined each channel.”

He sees the impact of the newest wholesale changes in SKF’s way of doing business, started in 2008 and implemented in 2010 under the banner of the SKF Bridge of Business Excellence, in much the same light.

A home-grown version of the international concept of Lean/business excellence, the SKF Bridge of Business Excellence is based on the four SKF values – empowerment, ethics, openness and teamwork – and five drivers – profitability, quality, innovation, speed and sustainability. These values and drivers are designed to keep the company at the forefront of world manufacturing for years to come.

“The SKF Bridge of Business Excellence builds on the success of the channel concept and takes it to a whole new level,” Rehmberg says. “It really goes to the heart of the definition of business. We want to deliver value to our customers in the most effective and efficient way possible.”

The key, he says, lies in unlocking the huge stores of knowledge in SKF’s nearly 45,000  employees, the vast majority employed outside Sweden, by encouraging and facilitating them to become more engaged as skilled employees and human beings in the workplace.

To do that, executives and managers from every business area and geographical corner of the company are being invited to business excellence boot camps in their region or in Sweden to learn leadership skills. They will then be asked to train colleagues, creating what Rehmberg calls “a critical mass” of trained managers throughout SKF.

“We have devoted a great deal of resources to elaborate our cascade training approach and the content of the training sessions,” he says. Employee feedback, he adds, has been “extremely good” ever since the first camps were given a test run in the manufacturing sector in 2009.

According to Rehmberg, the new continuous-improvement program is already paying major dividends, with success being measured in both dollars and sense. “We have already seen major efficiency increases in waste reduction,” he says. “It is becoming a habit for our people to ask themselves, ‘Are my actions bringing value to our customers? Am I doing it the right way?’

“This is not a project with a start and an end,” he adds. “We’ve embarked on a journey that will lead us into what we believe will be a very bright future.”