A particular place to go | Evolution

Per Delsing has been fascinated by the smallest components of the universe ever since he was a child. Now he is heading a project to develop an extremely powerful computer that uses a very small component, a qubit. The end goal is a quantum computer that is faster and more powerful than any other in the world.

If everything goes as hoped, the world’s most powerful quantum computer will become a reality at Chalmers University of Technology in Gothenburg, Sweden, in a matter of a few years. Per Delsing, professor of physics, heads the project, which involves some 50 researchers. Evolution talked to him recently at his laboratory.

“The best way [to describe a quantum computer] is to say it’s actually a large refrigerator with lots of microwave equipment around it,” Delsing explains. “The smallest components are qubits that sit on a small silicon chip. Just like in an ordinary computer, the information is composed of ones and zeros — the difference is simply that a qubit can be both a one and a zero at the same time. This means that it’s possible to perform calculations at an incredibly faster speed.”

From: Born in Umeå, Sweden, in 1959, grew up in Malmö, lives in Gothenburg.
Family: Wife and four daughters, aged between 25 and 30.
Work: Professor of physics at Chalmers and representative of the Wallenberg Centre for Quantum Technology, which is leading the charge to produce the world’s most powerful quantum computer.
Hobbies: Works so much that his free time is relatively limited – but when he has the time he enjoys downhill skiing, playing tennis and travelling with his wife.
Biggest strength: Creative and keen to embark on new projects.
Sign on the wall in his office: “It is easier to control an electron, photon and phonon than to raise four daughters.”
At Delsing’s lab, all that can be heard is the rhythmic sound of the refrigerator pumps being used to cool the tiny qubits to minus 273.14 degrees Celsius – close to minus 273.15 degrees Celsius or zero on the Kelvin scale, which is the coldest temperatures in the universe – a process that takes 36 hours.

Quantum technology has laid the foundation for the IT revolution, among other things, through inventions such as the laser and the transistor. Researchers now believe that we are on the eve of a second quantum revolution – a change even more seismic than the first one.

It’s not a matter of a gradual change, but something of a paradigm shift. What has paved the way for this is that we can now manipulate individual quantum systems such as atoms, electrons or photons and have full control of them.

Per Delsing
Professor of physics

“It’s not a matter of a gradual change, but something of a paradigm shift,” Delsing says. “What has paved the way for this is that we can now manipulate individual quantum systems such as atoms, electrons or photons and have full control of them.”

His interest in technology was aroused early and eagerly encouraged by his father, himself an engineer. Yet, when 12-year-old Delsing heard about superconductors and wanted to know more, his father had no idea what they were. “That surprised me because my dad usually knew about everything,” he recalls. “So I had to do my own research. I became extremely fascinated when I read that it was possible to transmit current without it getting hot.”

Delsing took his degree at Lund University in southern Sweden, and then went to Zurich, Switzerland, where he spent two years studying at Eidgenössische Technische Hochschule (ETH), the university Einstein had attended. He then went to Chalmers in Gothenburg for his doctoral studies. He’s stayed in the city for the past 34 years, with the majority of his spent time at Chalmers. And it’s the tiny particles that have always interested him the most.“You could say that I started out manipulating single electrons in circuits,” Delsing explains. “Then I switched to manipulating light particles, what are known as photons. Then my interest shifted to sound particles, known as phonons.”

As a researcher, he has been involved in two genuinely groundbreaking discoveries. The first was in 2011, when he and some colleagues succeeded in demonstrating the dynamic Casimir effect, a phenomenon that was predicted 40 years earlier but was thought impossible to prove.

You could say that I started out manipulating single electrons in circuits.

Per Delsing
Professor of physics

“The premise is that it’s possible to create light from a vacuum if you move a mirror at a speed close to the speed of light,” Delsing explains. “The problem is simply that it’s difficult to do this in practice. Instead of moving the mirror, we modified its properties so it looked like it had moved and could really generate light from a vacuum.”

The second discovery was moving an atom to emit sound. “Generally if you excite an atom – in other words, supply energy so that it jumps up to a higher energy level – it will emit light. But by placing it on a substrate that contracts or expands when you apply voltage, we got it to produce sound instead. This meant that we could actually listen to an atom for the very first time.”

Delsing is now looking forward to the outcome of the work on the quantum computer. The goal is to have a functioning 100-qubit quantum computer in 10 years, with several smaller quantum computers as milestones along the way. “The first one we make will be 10 to 20 qubits,” Delsing says. “By first building smaller processors, we can solve the problems in stages and take what we’ve learnt with us to the next version.”

The most powerful working quantum computers in existence today are probably around 20 qubits. Their development is surrounded by a lot of secrecy, so nobody knows for sure if one exists that is even more powerful. “One of the applications is cracking codes, so if anyone does succeed in building one in secret this would allow him to both spy on confidential communications and steal money because online transactions can be hacked using a quantum computer,” Delsing explains. “So it’s really important for the ‘good guys’ to get there first.”

Exactly what the Chalmers quantum computer may be used for is not clear. “Finding this out is part of our project,” Delsing says. “But in the same way that no one really knew what the laser could be used for when it was developed, I think that we still have the most exciting areas to explore.” 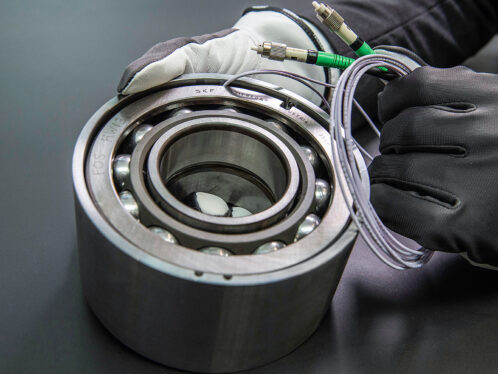 SKF and Proximion AB, a wholly owned subsidiary of Hexatronic Group AB, Gothenburg, Sweden, have entered into a development partnership for the [...]
Bearings,Digitization,
Digital Technology