» A case of cooperation

A case of cooperation An international cooperation across both continents and companies helped to develop the gearbox for the massive new Case IH combine harvester.

Bigger isn’t always better, but in the big business that is agriculture today, a new machine just now hitting the fields may well be. Going by the name Case IH AFX Series Axial-Flow® Combine, the new Case IH Class VII-plus axial-flow combine harvester from US-based Case New Holland (CNH) promises to go to the head of its class in terms of productivity and harvested crop quality.

“The AFX8010 is tremendous in terms of its capabilities – its speed, its capacity and its gentleness with the crops,” says Claudia Garber, manager of communications and brand promotion for Case IH North America.

At the core of the massive machine is a new rotor concept. “This whole machine is brand new so there are a lot of new concepts in it, but the heart of the machine is the [new] rotor,” says Peter Ungs, senior project engineer for drive-line systems for the AFX8010. “The combine is there to thresh and separate grain. The rotor is what does that job. If that rotor isn’t turning, the combine is nothing but a bunch of metal parts.”

CNH chose a single-rotor design, 1.5 metres long, most suitable for large fields. This means the combine’s primary market is North America, where large fields and high productivity expectations go hand in hand. Nevertheless, the AFX8010 made its debut at a trade show in Hanover, Germany, in the spring of 2003, winning Agritechnica’s “Machine of the year 2003” award. That is because beneath its shiny red surface is a story involving years of international collaboration and cooperation across two continents and four companies. Ironically, “friction” was the starting point for this textbook tale of international teamwork.

The combine’s high-capacity AFX rotor, first unveiled in 2002 as an upgrade for Case IH’s 2003 model-year 2388 combine, is the key to the AFX8010’s prodigious efficiency. Even installed in the 2388, it had boosted productivity by as much as 25 percent. The rotor gearbox (separate from the four-speed driving gearbox) is a new three-speed mechanism designed specifically to handle the power requirements of the big AFX8010.

“We were looking for a gearbox that was durable, reliable and as efficient as possible,” says Ungs. CNH issued design specs, and Comer Industries, an Italian company specializing in functional systems for agricultural machinery, won the contract. They did the design work and created prototypes that would be tested both in Italy and in the United States.
Comer’s initial tests had respected the theoretical norms for such a powerful combine, but when a gearbox prototype was tested, unexpected problems emerged. “This was a complicated project,” notes Matteo Garuti, an R&D engineer in Comer’s technical department.

He explains that the AFX8010 can harvest a number of crops, such as rice, soy and wheat. To do that it requires different rotary speeds – say, 300 r/min for rice or 500 r/min for wheat – and to handle them, it has three gears. Because diesel combines usually have one speed and two gears, the extra power and complexity of three speeds created a formidable challenge. “The bearings get a workout with that power,” Garuti says.

After a year, the gearbox was just entering what Ungs calls the lab development phase. One of the first steps in this phase is lubrication studies. “We wanted to have the gearbox adequately lubricated, but at the same time we didn’t want to have efficiency suffer,” Ungs says. More oil in the gearbox would mean better lubrication, but the trade-off would be power loss. “We tried to balance this, to get to the point where we could lubricate all the bearings with the smallest quantity of oil necessary,” he says.

Six taper roller bearings were needed, and each one was a different size. The high demands on them meant that ISO standard calculations were not adequate. “We had to recalculate the levels of tolerance for the bearings to avoid friction and damage to the gears,” notes Garuti. “We had phone meetings, personal meetings, e-mails. Talking together, we were able to work out the problems. SKF has very advanced instruments for calculating and testing, and we took advantage of them.”

Andrea Martinengo, the SKF engineer who worked on the project, can testify to the coordination chal-leng­es. Over the course of three years, he worked with SKF’s technical department of 15 and its three-person commercial office in Italy, plus two more individuals from SKF USA, plus three people from Comer and four or five more from CNH.
As Ungs explains, “We contacted the SKF people here. Our feeling is that if we have questions here in the US about a bearing, we want to work with our local people. We wanted to make sure the local SKF people were fully on board with the programme and we could get the support we needed.”

The people at SKF USA were happy to oblige. “It made sure that CNH got a unified opinion from SKF to help in the design and improvements,” says Mark Hinckley, national account manager for SKF USA and point man for the project. “We worked with [the CNH engineers] to optimize the way the oil flowed in the gearbox, the amount of oil in the gearbox, and some of the bearing fits. All of that helped to take the original gearbox with 12 litres of oil down to a gearbox with seven, which generates less heat, has a better lubrication characteristic for the bearings, and a better fitment practice than the original proposed gearbox.”

In all, the process of optimizing the gearbox to provide durability and reliability took three years and required many hours of test time in the lab both in the US and in Italy, subjecting the gearbox to harsh conditions. “We wanted the drive systems and this particular gearbox to be pretty much maintenance-free for the life of the machine,” Ungs says. “A lot of other parts should wear out before we ever have to touch a gearbox.”

Comer is a supplier to CNH, and SKF has been a supplier to Comer almost from the latter’s inception in 1975. “We have worked as close partners since 1980,” emphasizes Garuti.

“We also have a good relationship with SKF,” notes Ungs, “so by involving the local SKF people in the programme as we were testing, we knew that we had put together a team that could handle any issue that arose.”

Friction of the human-relations kind was avoided, according to Martinengo, by:

The result is a versatile new combine that is now working in fields across the world.

The heart of a new machine

“The bearings in a gearbox represent the heart of the machine and the most sensitive component in it,” says Andrea Martinengo, SKF application engineer in charge of industrial transmissions in Italy.

He knows whereof he speaks. For more than three years, SKF has worked with colleagues at Comer Industries and Case New Holland (CNH) to develop the main rotor gearbox of a new combine – the AFX8010 – destined for large-scale agricultural use. It is one of two gearboxes in the massive machine; the other is a four-speed gearbox for driving.

SKF’s ability to carry out advanced calculations proved invaluable in defining the specifications of the taper roller bearings to be used. Problems with contact pressure on the combine rollers and the performance of the gearbox turned out to be more challenging than initially conceived, given the performance expectations of the powerful new combine. In fact, six different taper roller bearings were involved, each one a different size, depending on its position in the gearbox.

In the prototype stage, Comer discovered that the original parameters used for the CNH combine weren’t suitable for the AFX8010. A multinational team was able to resolve the problem by recommending changes in the manufacturing tolerances for the gear shaft. 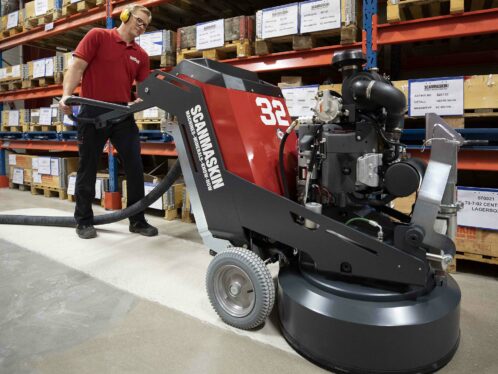 A strategic agreement has been signed by SKF and ReGen Powertech, a leading Indian wind turbine manufacturer. Under the agreement, SKF will supply [...]
Bearings,Condition monitoring,Energy and sustainability management,Mining and mineral processing,