Brain, an island microstate in the Persian Gulf next to Saudi Arabia, is a windy place. When the sun warms the Saudi deserts in the mornings, air is drawn onshore from the Gulf, bringing strong gusts through Manama, the capital.

The three BWTC tower wind turbines, each 29 metres in diameter, are architecturally ensconced between the two 240-metre-high (50-storey) towers and generate 1,300 MWh per year. This amounts to 15 percent of the new building’s energy needs, roughly equivalent to lighting 300 homes for more than a year. The main shafts of the turbines are equipped with SKF spherical roller bearings with a NoWear coating. The turbines went online in March 2008 and are oper-ational 50 percent of the time, depending on wind conditions.

Three bridges between both BWTC towers hold the north-facing wind turbines, which is the direction from which air blows in from the Gulf. The towers, situated on the Manama waterfront, are sail-shaped and help to funnel and accelerate the wind passing in between the towers and through the turbines.

Designed by Atkins, a British engineering consultancy, the BWTC project has received international acclaim for its commitment to sustainable development. This includes the LEAF Award 2006 for Best Use of Technology within a Large Scheme, the Arab Construction World Sustainable Design Award and the Best Tall Building award in the Middle East and Africa 2008 by the Council on Tall Buildings and Urban Habitat.

Solar panels were originally considered in the planning stages of the BWTC, but ironically they were found to lose their efficiency at the high Bahrain temperatures, making wind power a more viable alternative. 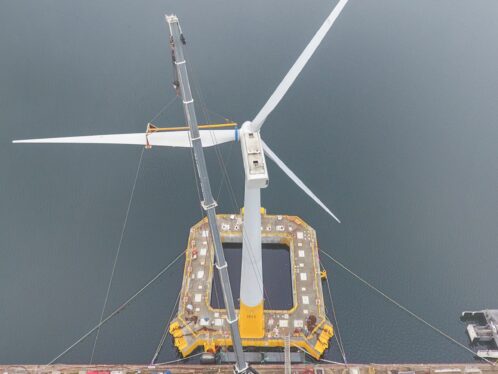 Harnessing the wind at sea

Offshore wind power is one of the most promising sources of renewable energy. In France, an innovative programme is under way: the installation of an [...]
Monitoring and diagnostics,Wind,
Industry

Imagine having a boat ride that’s as smooth as a train trip or an airline flight. With one high-tech device, an American company aims to transform an [...]
Bearings,Design,Marine,