Farmers are tough customers. So are the producers of their agricultural equipment and the parts that make up that equipment. The self-aligning ball bearings in a mulcher, for example, must perform well because of the load they bear and the stress they undergo. One of Berti’s mulchers may do 2,300 to 2,400 rounds per minute and sustain loads of 1,300 to 1,500 N. It won’t be used every day, but it has to work when it is called into service; farming decisions are based partly on nature’s whim, so downtime at the wrong time can be disastrous.
SKF spherical roller bearings are used for Berti’s heavy-duty agricultural machines as well as its forestry line, which does 2,200 to 2,300 rounds per minute and must sustain loads of up to 5,000 N. “It’s not the weight so much as the blows these machines will receive during their lifetime that test the bearings,” explains sales engineer Stefano Tenuti at the industrial sales division of SKF Industrie S.p.A., Italy.

The winemakers of Veneto in northeastern Italy have been tending their vines for centuries, but it was not until the 1950s that some of them began focusing on quality over quantity, and on export as a way to lessen dependency on the local market.

Today, vineyards such as Soave’s Pieropan [see sidebar] have achieved international recognition as a result of those decisions, taken more than half a century ago.

A similar strategy has been followed by Berti Macchine Agricole, a family-owned manufacturer of machinery for the agriculture and forestry industries. Although Berti is not a household name, it has a solid and growing reputation in its market niche.

“My grandfather started the business as a machine repair shop in the early years of the 20th century,” recalls Mario Berti, general manager of the firm. In the 1950s and 1960s, business grew, along with the growth of the Italian economy in general and increasing investments in vineyards in Veneto.

In 1959 the Berti family moved from Vicenza to its current home in Caldiero, a small town near Verona. By this time, Berti’s father had specialised in agricultural equipment and was beginning to build machinery for his customers, who were demanding sulphurators (machines that spray crops with sulphur as an insecticide) and wine-grape loaders.

A listening business
In 1972 the Berti company developed a mulching machine for vines and fruit crops. The design was innovative and there was little competition, so the mulchers were a great success. “We had to increase production the following year,” recalls Mario Berti.

This first model was produced in three sizes. As sales grew, the Berti company made a point of listening carefully to its customers, the farmers. And what the farmers were requesting were more machines to work more kinds of soil, to handle more crops and to operate on a variety of topographies (flat, terraced, steep inclines) and land conditions.

In the 1970s, the company began exporting its now-growing line of products to France and Spain; in the 1980s, it began exporting to Greece and Germany as well. By the time Mario Berti’s father died in 1983, Berti and his brother Giorgio had been running the business for seven years.

Serious competition, both Italian and international, began entering the market the following year, but the Berti brothers were prepared. “We attended agricultural trade fairs and developed a network of sales representatives abroad,” explains Berti. “We continued to increase our range and add accessories.”

In 1986 the Berti brothers decided to focus their business on shredders and mulchers for agricultural use. They moved to their present facility of 2,400 square metres (and are currently in the process of an enlargement that will bring their total covered space to 6,000 square metres).

Also in 1986, they changed the colour of the Berti trademark to bright orange (it had been blue and white) and added a logo that evokes the famous Scaligere steps of Verona and the jagged gears of mechanised
agriculture.

Increasing attention to environmental concerns and new agricultural regulations adopted by the European Community raised awareness of the Berti company’s environmentally friendly equipment. Demand continued to increase, “and so did the competition,” notes Mario Berti ruefully.

Quality before price
In 1989, the Bertis made a strategic decision about their company’s direction. “We decided to base our reputation on quality rather than price,” Mario Berti recalls. “We weren’t sure we could build equipment  cheaper than our competitors, but we were confident that we could build it better.”

The company continued to expand its range. At the beginning of the 1990s, forestry equipment was added. Today Berti Macchine offers 48 basic models for garden and parks, agricultural use, general green maintenance purposes and forests. The company has never removed a model from its line-up. Including all sizes, the company produces more than 200 different machines and sells them in 40 countries.

Mario Berti attributes the company’s sustained success in a highly competitive market and its accelerated growth over the past five years to a number of factors.

So far these strategies have served the company well. “Our strength lies in our seriousness,” reflects Berti.  “We want to do business with our customers now and 10 years from now, whether they are down the road or half a world away.”

———————————————SOAVE and SKF
Some of Italy’s most popular white wine is produced in the rolling hills of Soave, outside of Verona. Only a fraction of this is produced by the Pieropan Winery, but Pieropan’s Soave is considered one of the region’s best white wines. It was the second white wine in Italy to receive a Denominazione d’Origine Controllata back in 1968, and Soave di Pieropan has won many international awards since then.

The 35 hectares owned by Pieropan Winery produce three kinds of Soave and two sweet wines. “We produce 350,000 bottles a year,” says Teresita Pieropan, marketing director of the winery. “All the work we do is manual, so four years ago we purchased a Berti mulcher. It really helps us save time and manpower.”

The mulcher helps the Pieropan family tend its terraced vineyards. “Usually the mulcher follows the tractor,” explains Pieropan, “but we have it set up so that the mulcher precedes the tractor. This aids manoeuvrability and ease of operation and saves tread on the tractor tyres.

“In addition, this equipment has never broken down,” she says. 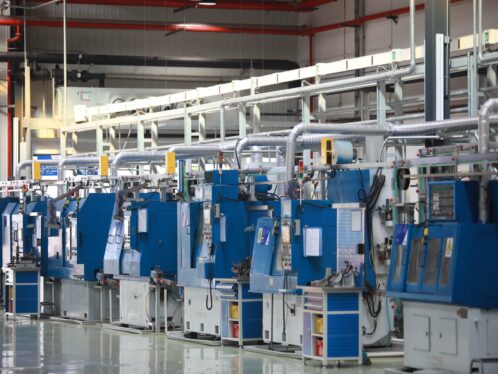 SKF has inaugurated a new tapered roller bearing factory in Changshan, China. The company invested 20 million euros in the new factory, which is [...]
Bearings,
Engineering Competence 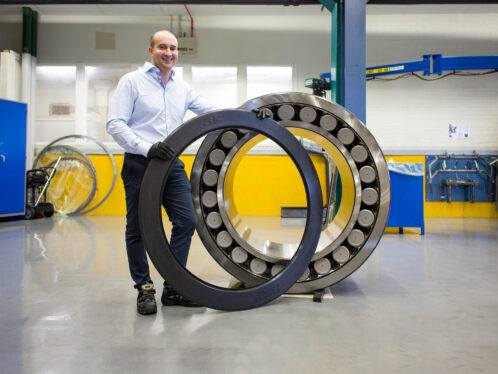 The 131-year-old Erdinger Weissbräu brewery in Erding, Germany, specializes in top-fermented beer. It exports its world-class products to more than [...]
Lubrication Solutions,