One of the requirements to prevent these failures is superior surface performance that favours the running-in process, is resistant to corrosion and is inert against unfavourable reactions from aggressive lubricant chemistry. Through SKF’s long involvement with the wind energy industry, the company has identified black oxidation as one of many solutions to improve operational reliability.

Black oxide is a surface treatment that is formed by a chemical reaction at the surface layer of the bearing steel and is produced when parts are immersed in an alkaline aqueous salt solution operating at a temperature between approximately 130 and 150 °C. The reaction between the iron of the ferrous alloy and the reagents produces an oxide layer on the outer layer of the bearing components, consisting of a well-defined blend of FeO, Fe2O3 and resulting Fe3O4. The result is a dark-black surface layer of approximately 1–2 μm in thickness. The total process consists of about 15 different immersion steps, in many of which it is possible to vary chemical contents, concentrations, temperatures, immersion times and fluid behaviour within the tanks [3].

Only the most relevant beneficial effects of black oxidation to the wind industry are summarized here. They are briefly described by three categories and demonstrate how black oxidation can help in reducing the risks following each failure mechanism.

In some wind turbine drivetrains, wind gearbox bearings may fail prematurely due to cracks, spalls or irregular white etching cracks (WECs). WEC refers to the appearance of the altered steel microstructure when polishing and etching a microsection. Failures can be found at several bearing locations in wind gearbox design, such as the planet bearings, intermediate shaft and high-speed shaft bearings.

1.1 Tribochemical attacks from lubricant and additives

Gear oils are developed to optimize gear performance. In most cases, anti-wear additives and corrosion inhibitors are added to gear oil to boost gear performance. Unfortunately, gear oil chemistry does not always favour rolling bearing operation. In gear tooth contacts, the macroscopic sliding is significantly greater (slide-to-roll ratio up to 30 %) than in bearings (slide-to-roll ratio up to 4 %, depending on the bearing type). Therefore, the dynamics (formation and removal) of reaction layers in gears are different from those in bearings.

When bearings operate in marginal (boundary and mixed) lubrication conditions, reactions happen between the additives in the gear oil and the steel surface in rolling contacts. Chemical energy exerted during the formation of a reaction layer together with the tribological energy likely changes the near-surface microstructure of the bearing steel [9]. The change of the near-surface micro­structure leads to the change in the mechan-ical properties of the surface and consequently the tribological performance (friction, wear and surface fatigue). If the reactions are unfavourable, then significant near-surface microstructure changes happen, followed by the initiation of surface micro­cracking.

The advantage of the black oxidation treatment in preventing surface crack formation can be assessed by subjecting the black oxidized surfaces to boundary-lubricated tribological contacts. An example of such a test is the skewed lubricated ball on disc. The ball and the disc are independently driven, allowing the control of slip-to-roll ratio that is relevant to bearing operation. Fig. 2 shows results of tests with oil containing aggressive anti-wear additives. The untreated steel surface suffers from surface micro cracks, while the black oxidized surface does not show any formation of surface micro cracks.

Black oxidation, as a surface “passivation” treatment, can effectively reduce the ingress of atomic hydrogen and chemical attack to bearing steel. This property was evaluated in the lab test results of C-ring and H-permeation tests [11].

The resistance of black oxidation to hydrogen uptake can also be evaluated in an electrochem-ical H-permeation test, in which atomic hydrogen is generated by electrochemical charging. The hydrogen permeates through the steel plate and is measured by electrochemical oxidation when being liberated from another side of the steel plate. The hydrogen ingress through a surface coating can be evaluated by comparing the obtained hydrogen permeation flux (current) with that from the non-coated specimen. Fig. 4 shows that steel plates with a black oxidized surface give significantly lower H-permeation flux than the non-coated specimen. This is because, different from diffusing in bulk steel, atomic hydrogen must be ionized (as proton) in order to pass through an oxide layer. The strong interaction between ionized hydrogen atoms and anions in iron oxide makes a black oxide layer acting as a barrier that decelerates H-permeation [13].

Large temperature gradients promote condensation of water from the humid air. Although the risk of water contamination is not often directly mentioned for wind applications, it has been well known that dissolved water could reduce the functionality of anti-wear additives [14] and that free water promotes corrosion and hydrogen uptake [15][16]. The corrosion risk becomes higher when standstill is encountered during the wind turbine main-tenance interval or the absence of wind [7].

If roller bearings are too lightly loaded (below required minimum load), it can lead to a considerable mismatch between the rotational speeds of inner ring and roller set, which in turn leads to high sliding between rolling elements and inner ring [18]. For demanding applications such as wind gearbox high-speed shafts, idling conditions and load zone changes can sometimes lead to high sliding conditions. Consequently, there is a high risk of smearing damage [19] [20].

Surface distress is a surface-initiated fatigue at an asperity level associated with poor lubrication conditions, corresponding to high surface (frictional) tractions [21]. It occurs especially on gear teeth, but sometimes also on bearings. If it happens to bearings, surface distress can be particularly detrimental to the bearing function.

Being not necessarily a primary failure mode for rolling bearings, it can facilitate or accelerate the appearance of other failure modes such as debris indentations, surface-initiated spalling and seizure [22]. The risk of surface distress can be reduced by several means, for instance, by lowering the surface friction, redistributing the near-surface stresses in a favourable way or reducing the mixed-lubrication pressures or optimizing the running-in process. One way to realize this scenario is to use protective coatings, such as black oxidation.

Despite the large amount of theoretical and experimental work on surface distress in general (see e.g. literature review in [21]), the influence of coatings on surface distress has not been sufficiently studied so far. Therefore, a series of experiments with black oxidized rollers was performed [23] on a surface distress test rig under la­boratory conditions [14] [21], which imply controlled slide-to-roll ratio, lubrication conditions, temperature, load and speed. The load unit of the surface distress test rig is schematically shown in fig. 7 (top): a rotating roller is in contact with three discs, all made of hardened bearing steel. It consists of a small roller (12 mm diameter) taken from a spherical roller bearing and three larger counter bodies that are cylindrical roller bearing inner rings. The roller and rings can be finished by grinding and/or honing to a desired roughness pattern. The material of tested rollers and counter bodies is ANSI-52100 bearing steel. The lubrication conditions during the tests varied from boundary to mixed lubrication. After the tests, the surface of the rollers was checked for surface distress. Results were compared for non-coated and black oxidized rollers under identical conditions.

The experimental results obtained with the surface distress test rig reveal a certain anti-surface distress protection of black oxidation throughout the whole range of the test conditions [23], as depicted in fig. 7.

Furthermore, a parametric analysis of the surface distress model [22] was performed for coated surfaces [23], including the effects of friction, coating stiffness and thickness. The existence of optimum coating thickness cor-responding to minimum surface distress damage was found. As shown by both experimental and theoretical results, black oxide treatment extends the range of surface distress-safe operating conditions compared with non-coated bearing steel surfaces. 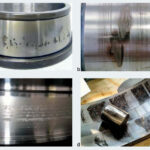