SKF EngineeringProducts’ Hydrocam is a cost-effective range of hydraulic bolt tensioners that is intended to provide reliable, accurate and safe bolted assemblies. The range is the result of development carried out by the Industrial Tightening Engineering Department of SKF Equipements, a part of SKF’s Linear Motion and Precision Technologies, based at Montigny le Bretonneux, close to Paris, France.

Bolting assemblies and joints, one of the most common methods to fix together two or more parts, is used throughout mechanical equipment.
For many applications, tightening bolts evenly to the appropriate level of tension is extremely important, requiring adequate equipment and tools.

SKF EngineeringProducts’ Hydrocam is a cost-effective range of hydraulic bolt tensioners that is intended to provide reliable, accurate and safe bolted assemblies. The range is the result of development carried out by the Industrial Tightening Engineering Department of SKF Equipements, a part of SKF’s Linear Motion and Precision Technologies, based at Montigny le Bretonneux, close to Paris, France.

Hydraulic bolt tensioning essentially induces a predetermined axial load into the bolt or stud. This load is commonly called the applied load and is calculated to make sure that the bolt (stud) retains the desired residual load.

While bolted joints are regarded as a simple and straightforward method of connection, they are often subject to conditions that are quite challenging.

Traditional torque methods using torque wrenches or spanners suffer limitations, as it is not possible to know the preload tension with any accuracy due to the influence of the friction coefficients in the threads and contact surfaces, which are quite impossible to define exactly and change continuously. Using either of these methods can be inconsistent as it is not possible to reproduce the exact tightening actions each time.

Bolted joint failures can result in very serious and expensive consequences that are often due to bad or inadequate mounting conditions.

Rough dimensioningmethods are too often used at the design stage. This can lead to considerable over-sizing of components, which can compromise the overall safety of the assembly rather than confirming its performance. Many surveys have shown that failures in bolted assemblies are mainly due to the fact that they were not properly designed and implemented. Also, there are many opportunities to introduce errors in initial analysis, drawing assemblies, calculating loads and the choice of components. During implementation, errors can be the result of the choice of tightening method, tooling and checking the assembly.

Poor assemblyis the major cause of assembly failure. In particular, bad or irregular tightening admittedly contributes to 30 % of all assembly failures, and this rises to 45 % when fatigue life is concerned.

By contrast,the Hydrocam tensioner series has been designed to develop an axial pressure to provide improved tightness, with less chance of shearing and loosening under load. The range also efficiently uses the fastener’s mechanical conditions, leading to a reduction in bolt fatigue under dynamic loading. Another factor is the repeatability of the tightening process.

Its development cameabout because of SKF’s desire to overcome problems encountered with slewing bearings. SKF engineers noted that when the tightening load is not evenly distributed in all the fastening bolts of the rings, the life of the slewing bearing is reduced considerably.

Hydrocam tensioning helps overcome the likelihood of poor mounting and is extremely simple: Initially, a turndown socket is placed over the nut to be tightened. An annular hydraulic tensioner grasps the bolt. The brace/reaction nut is screwed onto the protruding end of the bolt. Hydraulic pressure is applied and stretches the bolt. When the required level of pressure (and load) is reached, the nut is turned down without force using a tommy-bar. Finally, pressure is released and the piston is pushed back. Thus, the tightening load is exerted through the bolt tension, without any frictional or torsion stresses. This same tool can also be used for easy bolt disassembly.

The benefits ofusing the hydraulic principle to tighten bolts include:

SKF has developedthe Hydrocam range to suite a wide range of applications and can tighten bolts from 5 mm to 500 mm in diameter. The hydraulic system can work with either oil or water, which allows the pressure to go up to more than 2000 bars, most commonly, 1500 bars.

The standard rangeincludes tensioners for thread diameters from 20 to 150 mm, and tensions of up to 4650 kN. SKF also designs and manufactures adapted, specific or special tensioners to meet with particular customer requirements.

Bolt tensioners can be applied almost everywhere and there is already a number of sectors where the Hydrocam standard or adapted range is successfully applied, such as civil engineering, wind generation, diesel engines, aeronautics and nuclear industry.

In civil engineering, the bolt tensioner makes work easier, in particular when access is difficult and conditions severe. This includes situations such as tightening operations for the clamp bolts on the primary load-bearing cables of suspension bridges.

Other applications include providing high-performance and reliability of machines in very demanding applications such as wind turbines, providing fast tightening with no interruption to service. In windmills with a very large number of bolted assemblies, there are many applications for the Hydrocam tensioner including the slewing bearings. SKF has introduced simultaneous tensioner equipment for fast and accurate operation in the workshop and light and compact tools for easy work on site.

The bolted assemblyin large diesel engines is another area where bolts are placed under heavy mechanical stresses. This is because a diesel works by drawing in air, compressing it and raising the temperature to the point where the fuel will spontaneously ignite when it is injected. This compression-ignition process causes more vibration – simply because the air is compressed to a much higher degree than a petrol engine, the engine must be stiffer and heavier to withstand it.

In aeronautics industry, Hydrocam is used to tighten small bolts with very high accuracy, leading to a time reduction in assembly oper-ations. Hydrocam tensioners can take full advantage of the mechanical properties of the main assembly materials used in aeronautic applications.

In the nuclear industry, the Multiple Stud Tensioning Machine is a fully automatic machine used to close and open reactor vessel closure head. It is remotely controlled from the working floor of the reactor building, not near the reactor in the pool.

For tensioners (or other hydraulic equipment) to be powered by high pressure, SKF also offers a complete range of pumps, hoses and distribution blocks – all fitted with ball couplings. Along with the bolt tensioners, SKF also proposes a range of sensor washers that enable real and effective condition monitoring of the bolted assemblies even in running conditions.

Bolt tensionersare most often used for multiple or simultaneous tightening of bolts and in many circumstances are more accurate than using hydraulic torque wrenches since friction losses are not involved. This makes bolt tensioners parti­cularly suited to gasket joints, but their accuracy also makes them a popular choice for single or multi-bolt fastening in the mech-anical engineering industry. 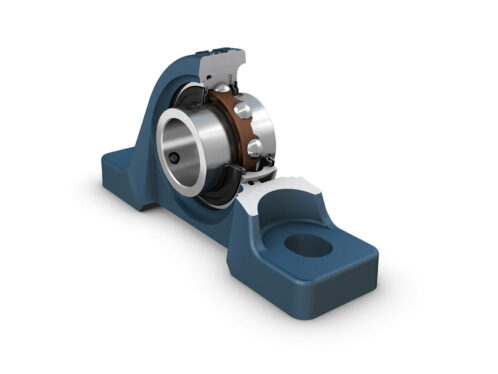 SKF has recently completed legal proceedings against a dealer of counterfeit bearings in Greece. The proceedings were initiated in 2009, after some [...]
Authorised distributor,Bearing failure,Failure modes,
Digital Technology