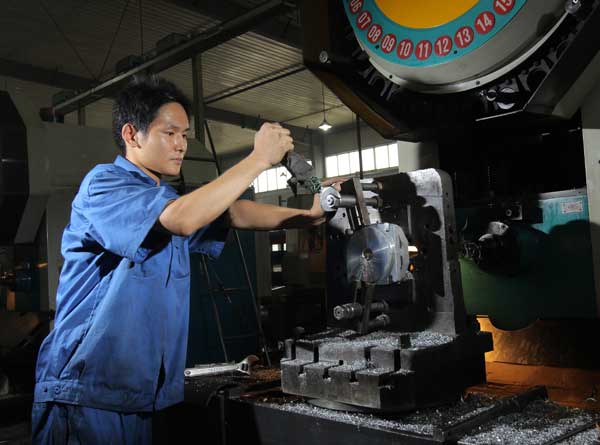 Keyuan’s plant covers more than three hectares; a new, larger plant is scheduled to open within two years. Keyuan now has more than 500 employees. Its turnover in 2010 was 320 million renminbi (37 million euros).

Keyuan was previously a subsidiary of the state-owned Xuzhou Construction Machinery Group. Following restructuring in 2001, it was transformed into a private enterprise. Prior to 2004, Keyuan’s sole product was hydraulic gear pumps, but it has since expanded into the manufacture of reducers. Hydraulic gear pumps and redu­cers are crucial to domestic construction machinery companies.

“In the first half of 2010, we were overwhelmed by orders, and employees had to work overtime to meet the demands,” he says. “We sometimes completed 60 million renminbi [7 million euros] in orders in peak months, but got orders of only 20 million renminbi [about 2 million euros] during the trough periods. It would seem as if our customers had abandoned us. The situation has been worse in 2011. It’s estimated that most construction machinery enterprises face the same dilemma, especially in July, August and September. We have to be adaptive to the changing circumstances.”

“Reliability is the key for Chinese accessories enterprises that provide components for the construction machinery industry,” Han says. “Small and medium-sized companies must improve product reliability in order to win recognition from their customers. Currently, Keyuan is focused on manufacturing highly reliable products at competitive prices, which is the foundation for further development. Relatively speaking, domestic accessories enterprises are capable of design and processing, but we are poor when it comes to materials, basic skills and component research.”

Now that Keyuan has a decade of experience, the company is beginning to explore new modes of development and make long-term plans, says Han. Its new plant in the south of Xuzhou, covering 13 hectares, will start operating this year or 2013. In the coming years, Keyuan plans to go public to raise money for further expansion.

“The entire construction machinery industry is now on the rise,” says Han. “According to domestic statistics, industry sales reached 400 billion renminbi [47 billion euros] in mid-2011 and could possibly achieve 900 billion renminbi [105 billion euros] in 2015. We are quite confident in future growth and expect Keyuan to create a niche in the domestic construction machinery industry.”

Han decided to give SKF’s sealing solutions a try in 2010, despite their higher cost. This proved to be a success, and the quality of Keyuan’s products and its reputation improved significantly.