The world is undergoing a period of rapid change. Global megatrends are altering the way we travel and do business and how we live. Urbanization is bringing greater numbers of people to cities, digitization and automation are accelerating our private and professional lives, and society is having to address several environmental challenges. At the same time, we’re seeing rapid developments in electrification, especially in electric vehicles, and a continued shift to globalization.

These global megatrends are, in turn, driving change in the field of bearings. Many emerging technologies require special properties in the bearings they use, including suitability for use with variable speed drives, a reduction in maintenance requirements, the enabling of increased power density and a reduction in friction.

Hybrid bearings provide promising solutions to all these existing and upcoming technical challenges. A combination of steel outer and inner rings with ceramic balls or rollers is giving hybrid bearings unique properties, making them suitable for use in a wide range of modern applications. SKF hybrid bearings make use of silicon nitride rolling elements and are available as ball bearings, cylindrical roller bearings and in custom designs.

The use of ceramics in bearings is not new. The global aerospace industry pioneered the material’s use from the 1960s through the 1980s, attracted by its light weight and heat-resistant properties. However, it was only in the 1980s that silicon nitride was commercialized. Since the 1990s, modern hybrid bearings have been used within numerous applications, including machine tools, wind turbine generators, railway and electric vehicle traction motors, aerospace and fluid machinery such as compressors, pumps and vacuum pumps.

The silicon nitride rolling elements used in SKF hybrid bearings have properties that are distinct from their standard steel counterparts. Silicon nitride has a compressive strength that is much higher than that of bearing steel, and its elastic modulus is about one-third higher, helping to reduce friction in the rolling contact.

Importantly, silicon nitride is more than twice as hard as bearing steel, which makes it ideal for demanding operating and lubrication conditions. It is electrically insulating in contrast to bearing steel, while its density is significantly lower. Finally, its coefficient of thermal elongation is lower by far, which allows accurate clearance adjustment but needs to be taken into consideration under certain operating conditions, including very low temperature applications.

So how do these properties solve specific application challenges? And why are hybrid bearings likely to become standard technology in many industries over the coming years?

One key application, where hybrid bearings can offer their full advantage, is variable speed drives, which are used for an optimized control of rotating equipment, such as pumps or traction motors. Those pulse-width modulated drives cause harmful high-frequency bearing currents. When current passes through a bearing, damage can happen to the rings and rolling elements as well as to the lubricant. An increased vibration level is the least harmful consequence, as electrical erosion can even lead to significant bearing and lubricant life reduction.

The use of hybrid bearings in this situation eliminates the problem. Silicon nitride is an insulator and prevents current passage between the bearing rings, even for very high frequency currents. Subsequent bearing failures can be completely avoided.

A second key advantage of hybrid bearings comes in the form of extended maintenance intervals and increased service life. The use of ceramic rolling elements in such bearings greatly increases the life of the lubricant, meaning the bearing can continue operating for longer before service is required. Ceramic rolling elements allow for improved lubricant supply to the rolling contact, and because there is less friction and electrical erosion and subsequent thermal degradation is eliminated, the lubricity is maintained for a longer period.

A third advantage of hybrid bearings comes in the form of facilitating higher operating speeds and thus greater power density. There is a general trend for electric motor manufacturers to increase power density, especially for vehicles such as trains and on- and off-road vehicles. In simple terms, power is a function of torque and speed. If the speed at which a bearing rotates is increased, then so is the motor power.

• The same power from a smaller electric motor

Because hybrid bearings have a lower mass than steel bearings, their speed capability is up to 25 % higher. In addition, hybrid bearings reduce friction, which in turn means lower operating temperatures and longer service life at high speeds. On top, increased bearing stiffness allows for better machine accuracy and less risk of rotor dynamic issues.

A final key advantage of hybrid bearings is friction reduction. Reducing friction in a bearing can help reduce energy consumption, which is a key consideration for modern industry. The ceramic rolling elements in hybrid bearings have a direct impact on friction generated from rolling and sliding torques. Energy losses due to rolling torque are lower in hybrid bearings because of the smaller contact ellipse, which results from a higher Young’s modulus. In addition, the sliding friction torque is reduced because of the better surface quality of ceramic rolling elements.

In SKF tests, friction torque has been shown to be between 5% and 8% lower at high speeds with hybrid bearings, compared with steel bearings. Meanwhile, tests reveal that hybrid bearings also cope extremely well with a reduction in lubricant volumes and viscosity, factors that can also help to reduce friction. By fine-tuning those lubrication parameters and optimizing the application, a friction reduction of up to 50% can become reality, without compromising bearing service life.

Hybrid bearings – from a problem solver to an enabler

The industrial and automotive manufacturing sector is looking to optimize its output to meet global sustainability challenges and to keep pace with social and technological trends. Hybrid bearings, using ceramic rolling elements and steel rings, have the potential to solve a wide range of design and maintenance issues, resulting in higher reliability. In addition to their problem-solving ability, hybrid bearings are enabling more economical operation and greater power output. Thus it is highly likely that hybrid bearings will become a standard bearing solution for a wide range of applications and industries in the coming years.

Increased speeds are a major advantage of hybrid bearings over their steel counterparts. For those wanting to increase rotational speed even further, advanced bearing cage technologies may be of assistance. SKF has introduced an innovative new cage design suitable for hybrid bearings that is made from polyetheretherketone (PEEK), a lightweight polymer material. The new two-piece cage design accommodates high-speed operation while reducing heat generation and lowers lubricant degradation at high speeds. It allows for speed increases of 60% over brass cages and 100% over conventional polymer cages.

Electrification, CO2 reduction, and digitalization - a selection of global trends, which are not only changing our experience of planet Earth, but [...]
Bearings,Hybrid bearings,
Industry 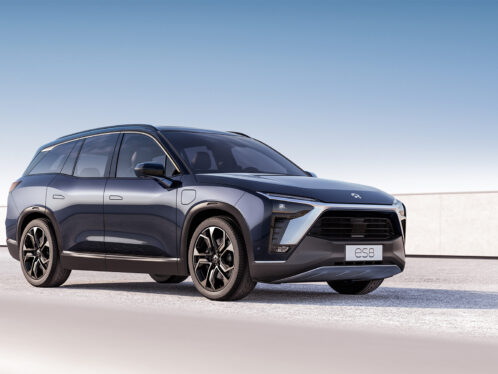 Chinese electric vehicle maker NIO has established itself as a leading brand in China by focusing on car-making technology and creating the ultimate [...]
Cars,Tapered roller bearings,
Engineering Competence