» Bearings that heal themselves 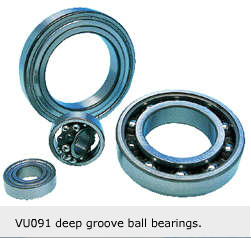 Bearings that heal themselves

The simple act of replacing one steel ball in a deep groove ball bearing by a ceramic one has opened up tremendous opportunities for the new SKF VU091 design. This new design results in a considerable increase in wear resistance when compared with a conventional all-steel bearing.
The bearing has clear advantages in a wide range of applications, such as in industrial gearboxes, fluid machinery and power tools where the traditional attributes of deep groove ball bearings are required, but the new bearing has the added built-in ability to reduce wear and fatigue-promoting stresses.
The self-healing properties of the raceways also have a beneficial impact on the reduction of vibration and noise generated by the bearings.

The VU091 bearing is a new SKF-patented bearing design that has a built-in capability to reduce wear and fatigue-promoting stress concentrations on rolling surfaces.The benefits of the self-healing design of the new SKF VU091 bearings are significant. In practice, the new capabilities are achieved simply by replacing one conventional steel rolling element with a rolling element made of a hard ceramic such as bearing- grade silicon nitride. The continuous renewal of the raceways by the burnishing process of the ceramic ball ensures that the raceways are maintained in a super-finish condition at all times. Even if surface damage is initiated, it will not progress further.
This design change increases wear resistance by a factor of seven, compared with the standard all-steel bearing. Also, extensive laboratory tests have shown that the fatigue life of VU091 bearings is improved by a factor of two to three when compared with standard bearings. The self-healing properties of the raceways also have a beneficial impact on the reduction of vibration (by up to 50 %) and thus of the noise generated by the bearings. Furthermore, the continuous burnishing action of the ceramic ball in the new design ensures the smoothness of contacting surfaces. Thus service life of the self-healing design is less dependent on the quality of the lubricant film than it would be with standard all-steel bearings.

Gearboxes and crankshafts
One anticipated use of VU091 bearings is in industrial gearboxes, where the bearings are lubricated with the same oil as the gears. Deep groove ball bearings are typically used in gearboxes because of their high-speed capability, low friction and moderate lubrication needs. The oil needed for lubrication and cooling of the bearings is often supplied by the gear wheels dipping into the oil bath.
Bearings in gearboxes, however, often risk contamination from dirt from the casting of the casing, wear particles from hardened steel gear wheels and the harsh working environments. VU091 deep groove ball bearings in this application will likely play an important role in upgrading gearboxes and in new designs. VU091 angular contact ball bearings and roller bearings including CARBTM toroidal roller bearings are also interesting SKF product possibilities for gearbox applications.
Crankshaft bearings in two wheelers often work under similarly difficult conditions as those of gearbox bearings, i.e., sparse lubrication and contaminated fuel and oil mixtures causing loss of tolerances, noise and fatigue of raceways. In such situations, VU091 bearings can offer an economical high-performance alternative. Customer tests are currently in progress.

Bearings in fluid machinery
Many bearing arrangements are used in fluid machinery applications, which means they are in or close to air and fluid streams. Often this is not a favourable position for bearings, since dirt particles can enter and cause wear and fatigue. VU091 bearings, with their ability to deal with contamination, can be expected to play important roles in various fans and pumps and also in hand tools and woodworking machines.
For example, electrical hand-tool designs are very compact, to save space and weight, forcing the cooling of the electrical motor to be carried out by air streams passing the bearings. This approach runs the risk that abrasives such as dust will enter the bearings through the seals and will lead to deformation of raceways and rolling elements. Ultimately, this will lead to premature failure and noisy bearings. By using the VU091 design, these problems can be much reduced, and increased life and reliability can be built into the final product. Tests are in progress with key SKF customers to evaluate VU091 bearings in various pump applications.

Wear life
The VU091 bearings were first tested to compare wear characteristics with standard all-steel bearings, bearings with all rolling elements in ceramic (hybrid bearings) and steel bearings with carbonitrided raceways. The wear test was of an SKF Colette gearbox type. In this test, 6305 ball bearings are subjected to a contaminated oil bath containing a mixture of hard, 63-64 HRC, metallic particles with particle sizes of up to 50 microns at a concentration of 600 mg/l. The duration of the test was 100 hours, during which the increase in clearance of the bearing was constantly monitored. Combined axial-radial loading conditions used in this test correspond to a Hertzian contact pressure of 2 GPa (load ratio C/P=7), which is typical for gearbox applications.
Results from the wear tests showed wear resistance in the self-healing design increased by a factor of seven compared with the standard all-steel design, and by a factor of two compared with carbonitrided bearings. These improvements are considerable and provide benefits for applications that suffer performance reduction from wear. The new bearing design can increase reliability and accuracy and can reduce maintenance costs.

Fatigue life
To quantify the benefits obtained by using VU091 bearings as compared with standard all-steel bearings, the fatigue life of the self-healing design was measured and compared with the fatigue life of the all-steel design. Batches of VU091 bearings and all-steel bearings were tested under identical conditions simulating two different levels of contamination severity. This was performed using two types of test methods under controlled endurance test conditions.
In the first test series, deep groove ball bearings 6205 were pre-dented with three dents on each inner raceway centre. The average dent size was (width x depth) 220 x 6.6 microns. In the second test series, the deep groove ball bearings 6305 were subjected to contaminated gearbox oil containing a mixture of high hardness metallic particles similar to those in the wear test. The bearings in both series were under a Hertzian contact pressure of 3 GPa (load ratio C/P=2.8).
The results of the two endurance test series indicate that under both test conditions a significant increase in fatigue life is obtained by the self-healing design. The VU091 bearing showed on average an increase in fatigue life by a factor of 2.6. Note that the life differential is about the same in the two tests, despite the fact that the 6205 bearings (pre-dented) were running under more severe test conditions. The severity of the dents (220 microns in diameter) was higher than in the case of the bearing running in contaminated gearbox oil.

Vibration and noise
Quiet running is an important characteristic of a mechanical system. Degradation beyond a given level constitutes a criterion for the limit of the operating life of a mechanical system. Noise increases rapidly in the event of raceway denting and wear. This is particularly frequent in mechanical systems such as gearboxes and transmissions, as particulate contamination or poor lubrication is common in these types of applications. For such cases, the ability of the bearing to retain internal precision and reduce vibration is of great importance to maintain a long service life of bearings in applications where quiet running is important.
The ability of the bearing to preserve its original quiet running properties is determined by the ratio of the vibration level measured in the bearings before and after they were subjected to specific contamination conditions (as in the wear tests already described). A significant reduction in the vibration level was measured in the self-healing design (on the order of 50 %), clearly indicating the advantage of this type of design in applications where noise reduction and quiet running characteristics are of concern, despite the severe environmental conditions under which the bearing is required to operate.

Lubrication
Poor lubrication or “low kappa” conditions are of less concern for the safe running of the self-healing design. The self-healing capability ensures that the raceway of the bearing keeps its high finish. Even extremely thin lubricant films are able to adequately separate the rolling surfaces. This ensures safe running for lubrication conditions that would normally lead to shorter bearing life. Furthermore, the ability of the self-healing bearing to endure thin lubricant films makes this bearing able to withstand conditions of oil starvation for a longer time. This situation is found in bearings that are grease lubricated. In these applications, the grease, due to aging, gradually loses its lubricating characteristics. Thus the life of a greased VU091 bearing will be significantly extended compared with the standard all-steel counterpart.