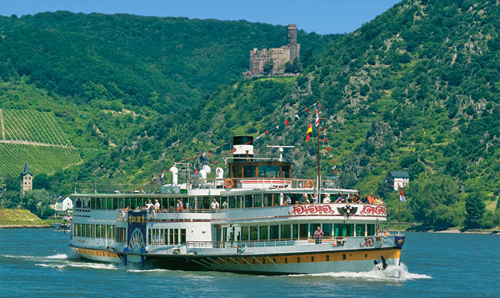 The paddle steamer RMS Goethe has been in service on the Rhine River for almost a century. During her lifetime she has experienced glamour, bombings and rebirth.

To watch the RMS Goethe navigate the romantic landscape of castles, green hills and vineyards in the Middle Rhine Valley in Germany is to experience a bygone era. The area is listed by UNESCO as a World Heritage Site for its historical significance and beauty, and the old paddle steamer is a perfect complement to the setting.

Cologne-Deutz shipbuilder Gebr. Sachsenberg built the RMS Goethe in the early 1900s. The paddle steamer made her maiden voyage in 1913, and Art Deco styling still graces her three salons, harking back to the 1920s.

But the RMS Goethe’s history has not been smooth. During World War II she was bombed by the Allied forces in Oberwinter and sank. She was recovered and returned to service in 1953. The extensive restorations involved extending her original 255-foot length to 272 feet.

In the 1950s, RMS Goethe’s steam plant was converted from coal to oil firing. She went through a further extensive rebuild at the end of the 1980s and did not return to service until 1996. The most recent renovation occurred in 2009, when her oil-burning steam engine was replaced with a hydraulic motor. Because of the completely new requirements, SKF was consulted about establishing a suitable bearing arrangement for the new powering system.

Now, each year from April to October, the RMS Goethe makes daily 42-mile trips between Rüdesheim and Koblenz. The cruise operator, KD German Rhine Line, is celebrating the ship’s 100-year history and planning to keep her a familiar sight on the Rhine for many more years to come.