» A flash of power 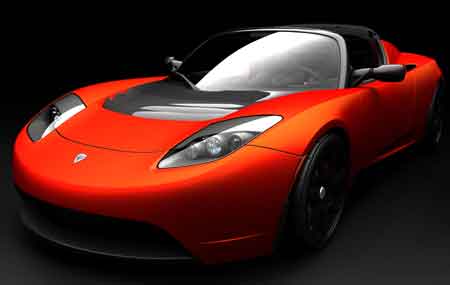 A flash of power

A small US-based car manufacturer has come up with an electric car with performance that can match – or even outperform – most of its petrol-driven cousins.

A small US-based car manufacturer has come up with an electric car with performance that can match – or even outperform – most of its petrol-driven cousins.

For a brief period in the early 1900s, electric cars actually outnumbered their petrol-driven competitors in sales se bild ures. In those days, cars such as the Baker Electric, with a top speed of 35 km/h and a range of some 150 kilometres, could keep up with the competition. In add-ition, they offered the advantage that owners could start them from the driver’s seat instead of having to step out to crank up.

But cars powered by combustion engines soon took the lead. An important factor was the invention of the starting motor, introduced in a 1913 model from Cadillac, which made crank starting redundant. Cheaper fuel and a huge advantage in terms of range and performance did the rest. Soon petrol-driven cars ruled the roads, leaving electric cars behind in a cloud of exhaust fumes.

It wasn’t until the 1970s – with skyrocketing petrol prices driven by the 1973 oil crisis and growing public concern about the polluting aspects of combustion engines – that the vehicle industry started to look again at electric cars.

However, 30 years later electric cars have still never really managed to get out of the starting blocks. The weak spot – the batteries – have so far not been improved enough to give them performance and range that can compete with petrol-driven vehicles.

But a small US-based car manufacturer, Tesla Motors, started in 2003 by Silicon Valley engineers and entrepreneurs, has now come up with an electric car that can match – or even outperform – most of its petrol-driven cousins.

Named after Nikola Tesla, the inventor of the AC electrical motor, the Tesla Roadster has a 185 kW (248 hp) electric motor that provides a top speed of 200 km/h and enables the car to reach 100 km/h in under four seconds. This means that many Ferraris and Porsches could be left behind when the traffic lights switch to green. The vehicle range is 350 kilometres per charge, and the lithium-ion battery pack can be recharged in as little as 3.5 hours.

One of the partners in the Tesla project is SKF, which has delivered sensorized wheel bearings and highly specialized hybrid deep groove ball bearings for the main rotor in the electric motor.

With a price tag of some 100,000 US dollars, the Tesla Roadster is still a vehicle for the chosen few. But more than 100 people have taken ownership of Tesla Roadsters as of December 2008, and about 1,200 people have ordered them, so the future looks bright. An electric car with competitive performance and a price that most people can afford is now a step closer.