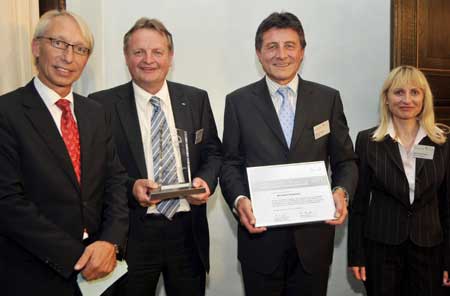 For the fifth time, German truck manufacturer MAN Nutzfahrzeuge has rewarded its 10 best suppliers with the “Trucknology Supplier” title. SKF has been named one of the 10 best suppliers for 2007. Environmental criteria weighed heavily in selecting the winners.

“On the one hand, the 10 prize winners convinced us with a degree of innovation, quality, reliability of supply and cost-consciousness that was above the normal level,” says Martina Buchhauser, head of MAN’s Central Purchasing division. “On the other hand, they displayed a positive basic attitude toward exploring new avenues with MAN in search of solutions.”

SKF has a long-lasting and reliable relationship with MAN. MAN was the first customer in Germany to switch to SKF’s new truck hub units, for example. Today SKF is the sole supplier of bearing units for MAN’s front axles. In May 2007 SKF delivered its 1,000,000th truck hub unit to MAN Nutzfahrzeuge.