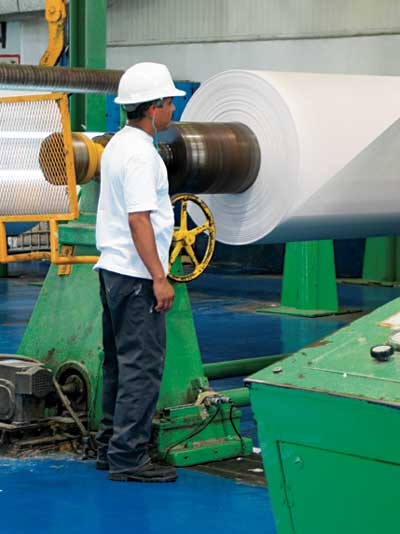 Mexico-based Compañia Papelera Maldonado keeps costs down while increasing exports and profits, thanks to a new service solution.

Mexico-based Compañia Papelera Maldonado keeps costs down while increasing exports and profits, thanks to a new service solution.

Looking out from the mountains of northeastern Mexico, Juan Carlos Fuzy, plant director of Compañia Papelera Maldonado S.A. de C.V., can see the future – at least for his company. Papelera Maldonado, a leading producer of paper products for the Mexican market, is headquartered in Monterrey. The city is in the thick of Mexico’s growing export business, and that is an opportunity that Papelera Maldonado wants to exploit.

But, he adds, “we are working very hard to export more. In the speciality paper area, mainly, we are looking to export about 40 percent of our production.”

To help with this, Papelera Maldonado turned to SKF and its local Mexican distributor Rodamientos y Accesorios S.A. de C.V. (Ryasa). Together, the three have implemented an integrated maintenance solution (IMS) arrangement that promises to deliver profits directly to Papelera Maldonado’s bottom line. That will have a bearing – literally – on the Mexican paper manufacturer’s ability to get its profits up, costs down and exports rolling.

Increased profits
Papelera Maldonado has been in business nearly 50 years and is part of the Copamex paper production group. Copamex made 1.95 billion Mexican pesos (about 160 million euros) of sales in the first quarter of 2003. Revenues for the first quarter of 2003 climbed 4 percent compared with the same period in 2002 and debt declined nearly 7.5 percent. The revenue surge is due in part to an increase in exports.

Papelera Maldonado’s kraft paper products are used in paper sacks and boxes. This, Fuzy says, is a high-volume but low-margin business. Speciality papers, on the other hand, have lower volume but net a heftier profit. In this area, the company faces less competition and enjoys an advantage derived from experience.

“That’s because it’s not volume,” Fuzy says. “It requires know-how and flexibility. In speciality paper, we make around 50 different types for different applications.”

Speciality papers, as well as kraft products, are all produced on paper machines. These are large contraptions, stretching tens of metres in length and as much as five metres in height. The paper enters one end of the machine as a dilute paste and travels on an endless belt of woven plastic wire past a series of rollers, tubes, presses and driers. It’s a loud process that produces water in abundance and paper ready to be rolled up for shipment and sale.

The paper machines have thousands of bearings and are expected to produce profitably for decades.

Today, the four paper machines at Papelera Maldonado produce about 13,000 tonnes per month. Depending on the type of product and the specific machine, the paper rolls may measure more than three metres across and spool out at up to 600 metres per minute.

“We are looking for less than 3 percent,” Fuzy says.

In considering ways to achieve this, Papelera Maldonado started with a basic truth. Papelera Maldonado employs nearly 700 people, but those employees are not there to tinker with machinery. They’re there to turn raw materials into saleable paper products. Thus, officials at Papelera Maldonado recognised that the best approach, just like profitable exports, would involve outsiders – a familiar concept, according to Fuzy.

“We have been using outsourcing,” he says. “We are looking for experts in order to have problems fixed. We are shifting our focus more onto making paper than on repairing machines.”

So Papelera Maldonado entered into an IMS agreement running from 2003 to 2008 with SKF Mexico and its distributor Ryasa. According to José María Aguirre Guzmán, Ryasa’s owner, the agreement focuses on the health of the bearings within the four machines, as well as bearing health within the conversion area where big rolls of paper are turned into smaller ones and the gloss is applied.

“It has been based mostly on condition monitoring,” Aguirre explains. “In parallel, a bearing-maintenance training programme is being carried out, along with bearing mounting and dismounting, and laser alignment programmes.”

Bearing inventory
Furthermore, the agreement has a component that deals with design and maintenance procedures, with an eye towards improving the built-in uptime of the machines. The arrangement also covers bearing and parts warehousing. In this way, Ryasa and SKF Mexico cover the cost of maintaining a bearing inventory and assume the burden of managing it.

As a result, Papelera Maldonado can concentrate on the paper business instead of bearings. It’s all part of an overall plan that the company has to boost profits.

“We are trying to make a strategy with this agreement with SKF,” Fuzy says. “We’ve tried to reduce the time lost in the kraft segments with the machines, as well as in the speciality. This will reduce the cost.”

Fuzy expects that reaching the target will take a couple of years, with steady improvement year to year. However, the company is already seeing dividends in the training area after only a few months. Thanks to an infusion of SKF expertise, Papelera Maldonado’s maintenance technicians are now more skilled than before. They are more in control of the machines, rather than vice versa.

“They have improved a lot of the procedures of aligning, mounting and installing the bearings,” Fuzy says.

Those gains are vital as Papelera Maldonado considers its future. Company officials know that the North American Free Trade Agreement is entering its second decade and that other pacts and market forces will increasingly drive trade and exports. The pressure to cut costs is likely to intensify. The expectation is that the IMS arrangement, with its design, management and training elements, will pay off – and relatively soon.

“We understand that we have to fix the machinery better in order to save money in spare parts and bearings,” Fuzy says. “When we have the people working with better procedures, we know that the rest of the things will go very quickly.”