» Rebuilding on a history of papermaking 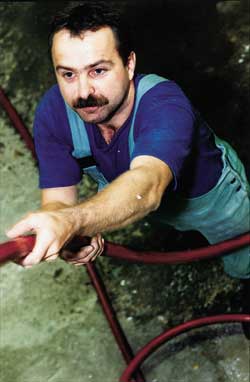 Rebuilding on a history of papermaking

CARB® on all cylinders
In 1999, Czech papermaker OP papírna s.r.o. concluded a complete redesign of its PM5 papermaking machine. As part of this project, new bearings were ordered for the bearing arrangement of all 23 drying cylinders. CARB 3044 K/C4HA3, which had already proved its worth during a trial period, now supports the non-locating side of all the cylinders.
The bearings were mounted under the supervision of the SKF Application Engineering Service, using the SKF Drive-Up method. OP papírna s.r.o. expects that this new bearing arrangement will not only help increase the bearings’ life but will also reduce maintenance costs. In addition, the standard CARB bearings take up a considerably larger misalignment and thermal expansion than the cylindrical roller bearings they replaced.

At the Czech Republic’s Olšany paper mill, a major investment in technology joins a long history of craftsmanship. The goal is to produce speciality papers of consistently high quality.Situated in the northernmost fringes of Moravia, the OP papírna s.r.o. paper mill has long been established in an area renowned throughout the Czech Republic for its paper.
Back in 1861, the brothers Schmidt decided to convert their newly acquired water mill in the village of Olšany to paper production. The company initially focused on producing cigarette paper, which was exported to South America, India and – by the turn of the century – even China. The paper was of such quality that by 1937 the Olšany paper mill’s output had won prizes both within the Hungary and beyond.
However, starting in the late ’40s, every paper mill on the River Morava became integrated into a group known as Olšany Papírny n.p. Quantity rather than quality became the order of the day, a familiar story in the former Czechoslovakia then and for the next 40 years. Nonetheless, Olšany Papírny did benefit from an additional papermaking machine in 1970 – the PM5, which churned out thin printing and technical paper as well as tissue-like Bible paper, tinted printing paper and paper for offset printing.

Moving into the modern era
Today, OP papírna s.r.o. is a 100 percent subsidiary of Trierenberg Holding, which is investing in a wholly modernised plant to meet the demand for highly sophisticated thin papers.
The plant has three papermaking machines – known in the industry as PMs – which are in operation seven days a week, 24 hours a day. PM1 rolls out graphic paper, most of it headed for western Europe. PM4 produces 6,000 tonnes of cigarette paper a year, with much of this output now being sold in the Commonwealth of Independent States (CIS).
The third papermaking machine is the massive PM5, which produces thin, wood-free paper of weights of between 25 and 70 grams per square meter, depending on client requirements. Every year, 30,000 tonnes of its gleaming white rolls will end up as pages in Bibles, encyclopaedias, legal textbooks, catalogues and leaflets across western Europe, the CIS and North America.
A comprehensive rebuild was concluded in June 1999, making this machine in many respects the apple of OP papírna’s eye.
“The design period for the rebuild of PM5 was only 11 months,” says project manager Herwig Ferstl, who headed the operation. During the design period, engineers and specialists from different countries prepared the plant’s mechanical, electrical and control equipment.
The rebuild itself was mainly carried out by local companies, says Ferstl. “We replaced important equipment such as the steam and condensate system, the heat recovery system including the dryer hood, sizer, calender and machine drive.”
Other equipment, including the dryer cylinders, pumps, agitators and fans, was sent to loca1 workshops for a complete overhaul and service. Adding modern digital systems allowed the process of papermaking to be centrally controlled.
“I would say that almost 100 percent of the machinery has now been rebuilt or overhauled,” says Ferstl. “Only the building is old.”
The machine is huge, largely encased in a protective aluminium drying hood. While it is operating, it produces much noise but not too much heat. The dryer is protected by the hefty aluminium hood, which also helps retain, recoup and recycle energy. At one end are the head box, wire section and press section, where the wet pulp web is pressed before racing along a “felt” into the tropically steamy dryer section. The paper is then dried on 23 drying cylinders, all automatically temperature-controlled. At the end of the process, an endless sheet of paper ripples out, to be whirled into tightly packed, ice-white rolls.

Craftsmen meet technology
For all the high-tech, the human element is still important. Working life has changed over the past couple of years for OP papírna’s 500 employees, but it is obvious that these Moravian papermakers are craftsmen, just like their fathers and grandfathers before them. Gently patting and smoothing the spinning, glossy cylinders, they demonstrate the same know-how and intimate contact with the paper that has existed since the days when water drove the mills.
“The Olšany mill has a long history and provides one of the main work opportunities,” says Radim Kovácek, manager of the technical department. “That’s why fathers also pass on their knowledge to their sons.” And why papermaking, it seems, is in the local blood.
Now, however, the craftsman’s touch is combined with data analysis in the soundproofed control rooms of the papermaking machines. Ferstl believes the new technology has been a great success with the Olšany workers.
“Our group’s goal is to produce the same perfect quality in every production place in all our mills, so that we don’t differentiate between quality for eastern or western Europe or North America,” Ferstl says. “We can’t say the work is done now. We’re in a really strong position, but we know also that we have to keep on increasing quality, being flexible and making sure that we get even better.”

Susie Lunt
a journalist based in Prague
photos Arne Valen