» Rolls in the hot spot 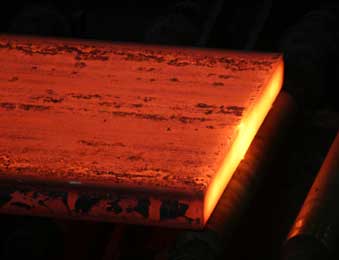 Rolls in the hot spot

At Stahlwerke Bremen(Bremen Steelworks), Germany, in a room made of insulated trapezoidal metal sheeting that occupies one corner of the continuous casting shed, there are several segments of the continuous caster that have been removed for routine maintenance. Some of the segments are ready to be redeployed, and they’re all clean and bright. Others are awaiting maintenance, the ends of the rolls covered in grease that has solidified into a dirty mass. But there’s one segment there, just removed from the line after a 16-month tour of duty, that is completely free of grease. Someone who didn’t know the business could not tell whether it had just come out of service or was just about to go back in.

The continuous casting line is a key area in an integrated steelworks, in which everything from smelting to galvanizing and the production of blanks for the automotive industry can be done on a single site. Stahlwerke Bremen is part of the Arcelor group, one of the world’s largest steel producers.

There are 94 pairs of roll lines in each of the two continuous casting lines, says Thomas Groth, who is in charge of mechanical maintenance at the steelworks. The roll lines are subjected to extremely difficult working conditions. Molten steel is poured into two copper ingot moulds and emerges from the moulds in two long strips, still molten at their core. The strips are led between the pairs of rolls along the continuous casting line where they are gradually cooled and bent through 90 degrees, so that they end up horizontal. As the steel is forced around the bend, the line is subjected to high temperatures and very heavy ferrostatic forces. Once the line is horizontal, flame cutters cut the strips into slabs. The surface of the rolls and the controlled water-cooling process make sure that the final product has a high surface quality and inner homogeneity.

Groth says the company has beenlooking for ways to improve the performance of the caster rolls since 1997. The rolls are traditionally lubricated with grease that is continuously pumped through the bearings. But the mixture of grease, cooling water and contaminants is a potent mixture. At the high temperatures involved, it solidifies on the rolls and their bearings. The water, which runs through a closed system, has to be cleaned, and the hazardous residue must be disposed of. But even if everything works at its best, grease and water will still mix, causing bearings to become blocked and imperfections to occur in the surface of the slabs. To offset this, regular shutdowns must be planned for maintenance, and rolls must be removed at frequent intervals for overhaul.

Groth and his team use their Segment 2 as their reference point. This is a section of the line near the top of the curve. Back in 1997, the rolls here managed to achieve an average throughput of 2.4 million tonnes of steel, which is good in industry terms, even though Groth says they were still looking for ways to improve.

But in 1999, when the capacityof the line was increased by widening the slab to 2.67 metres from
2.4 metres, the rolls found the new dimension hard to cope with. “We were getting an average service in Segment 2 of only 0.9 million tonnes,” says Groth.

That was clearly not good enough. “We tried several solutions,” he says. “Each of them needed a year to be properly tested, although some could be excluded very quickly. Ordinary sealed bearings didn’t last long – there was far too much corrosion. Some solutions were worse than the original, but we learnt from them, too.” And then SKF ConRo came up in discussion.

SKF ConRo is a sealed roll unit offering a new approach to continuous casting roll line use that reduces costs considerably. It features a specially designed seal, enabling relubrication-free operation. As a result, grease and water don’t mix. There’s no damaging sediment, water stays clean, and there are considerable savings in maintenance and improvements in reliability and quality. The SKF ConRo range is optimized to deal with the various operating characteristics of the different parts of the line.

The target that Stahlwerke Bremen set SKF was a return to a throughput of 2.4 million tonnes, the standard achieved before the slab was widened, when the loads were smaller. Segment 2 SKF ConRo’s were removed after they had achieved that tonnage, just to see how they were doing. “They looked good,” says Groth. “We could have left them in, and I guess they might have made 3.6 million tonnes.” SKF ConRo roll units in other segments have already reached 3.3 million tonnes.

Earlier the line was stoppedevery six weeks for maintenance, and there were always a few unplanned stoppages in addition. “Now planned maintenance takes place every 10 weeks,” says Groth, “and stoppages due to bearing problems have reduced drastically. People used to laugh at the idea of life-long lubrication for rolls in continuous casting lines. It’s a big step.”

But it was hard to convince those who had to make the decision to take that step. “Each time you stop the machinery, you lose up to three hours, so it’s very expensive,” he says. “It felt like a big risk to adopt a system that no one had ever had any experience with and that might cause even more stoppages than the old system.” Suspicion of the new system led to the requirement that the first segments that were fitted with SKF ConRo have the piping for grease lubrication as well – just in case SKF ConRo didn’t work. That’s no longer the case.

SKF ConRo was a significant investmentfor Stahlwerke Bremen, but, says Groth, the time was right for the change. “Because we had widened the slab, we needed to replace the rolls,” he explains. “We used to have roll lines made of two rolls with four bearings, but, because of the extra weight, we needed to change to three rolls with six bearings. So we had to invest anyway. It could be that, if you can’t integrate it into such a project, it might be hard to justify the expense.” And in fact, at Stahlwerke Bremen, some roll lines that were already in three segments have not yet been replaced. But SKF is looking at whether it can retrofit SKF ConRo to the existing rolls and bearing housings.

Groth says that this project is one of 134 projects he’s running, all aimed at saving money for Stahlwerke Bremen. He says that savings that SKF ConRo has contributed is “an important part of the total.”

“We looked to see exactly where the weaknesses were,” he says, “and we only did what was needed.” That meant that, in some parts of the line where water (and corrosion) was not a significant problem, it made more sense to fit sealed bearings. But, Groth says, for those areas of the line that are subject to large amounts of water and heavy loads, SKF ConRo is the right solution.

A big step in the right direction

The continuous casting line at the Stahlwerke Bremen features a range of SKF products. SKF ConRos from 150 mm to 300 mm in diameter are in use in 48 of the 94 pairs of roll lines. At other points in the line, SKF has installed sealed spherical roller bearings as well as spherical roller bearings and CARB® torodial roller bearings that still use the traditional pumped grease lubrication. SKF ConRos and bearings that have been removed from the line for maintenance are sent to SKF for renovation. Thomas Groth, who is in charge of mechanical maintenance at the steelworks, praises the cooperation with SKF. “SKF put in a lot of development know-how,” he says. “There probably never will be an ideal solution for environments like this, but SKF ConRo is certainly a big step in the right direction.”