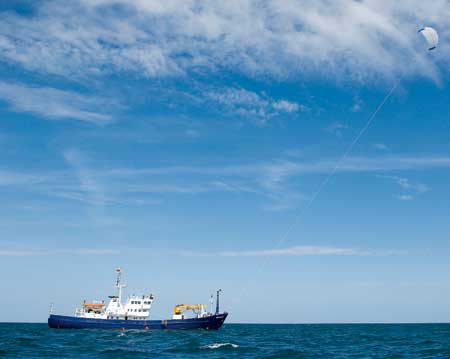 Some 70 years after the last wind-powered cargo ships sailed around Cape Horn, wind power is again making a comeback on the high seas.

Some 70 years after the last wind-powered cargo ships sailed around Cape Horn, wind power is again making a comeback on the high seas.

Instead of sails mounted on masts, the system, developed by Hamburg, Germany-based SkySails, uses 160-square-metre computer-controlled kites that can fly 300 metres above the water. The kite system is equipped with SKF bearings and housings delivered from German distributor Josef Blässinger GmbH.

Depending on wind conditions, the wind power is used both to augment and relieve the main engine.

SkySails’ kite is capable of generating up to 5,070 kW (6,800 hp), and it can cut a ship’s diesel fuel consumption by as much as 35 percent, or about 1,000 euros a day. Under optimal wind conditions, fuel consumption can temporarily be cut by up to 50 percent.

For commercial shippers worried about the bottom line, these are welcome savings. And the environmental angle isn’t anything to sneeze at either.

According to SkySails’ calculations, the world’s 90,000 cargo ships burn through 2.1 billion barrels of oil per year, accounting for 4.5 percent of the global emissions of carbon dioxide and 20 percent of the sulphur dioxide.

And, according to the International Maritime Organization, shipping companies will be required to reduce their emissions significantly in the coming years.

A universal application of its technology, says SkySails, could keep 146 million tonnes of carbon out of the atmosphere each year.