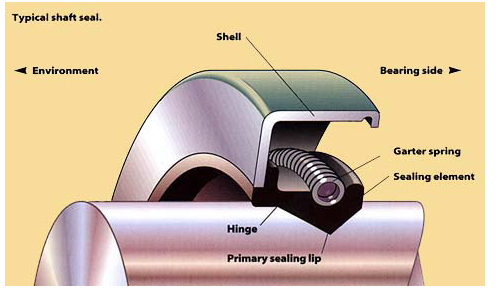 By considering the influence of contamination and by allowing for today’s improved seal designs, one can more accurately predict how a bearing will perform in a given application. The new SKF life theory quantifies the importance of lubricant cleanliness in maximising bearing life and helps users determine what controls to put on the environment to maximise bearing life. Users can assess what needs to be designed into equipment to avoid problems in the field.

This guide suggests sealing considerations early in the design process for new applications. Existing applications should track bearing life and analyse both bearing and seal to determine the failure causes.

The seal and its function

Dynamic radial shaft seals have the difficult job of creating a barrier between surfaces in relative motion, one being usually stationary while the other rotates. There are non-contacting, or labyrinth seals, and for more positive sealing, contacting or lip seals.

Seals keep contaminants out of a bearing while keeping lubricants in. Seal selection depends on many factors, including operating speed and temperature, required service life, and level of potential contamination. Maintenance technicians must determine seal material and design, and whether they need a seal with or without springs.
A non-spring loaded seal is generally used for grease retention or dirt exclusion in slower shaft speed applications. They are not, however, intended for lubricating oil retention.

Most oil seals are made from some form of nitrile rubber, which performs well with most mineral oils and greases. If a seal fails regularly, it may be beneficial to consider upgrading the lip material. There are a variety of lip materials with broader temperature ranges and chemical capability available from CR: CR Duralip and CR Duratemp, in addition to polyacrylate elastomers, and silicone. CR offers custom elastomer formulations such as CR LongLife fluoroelastomer and CR LongLife PTFE. The selection of a LongLife elastomer can improve seal life by 2.5 times over nitrile at temperatures of 90 °C. The charts below show the resistance to abrasion and the operating temperature ranges of the various seal lip materials.

Shaft seals perform best on medium to high carbon steel hardened to normally 55 on the Rockwell C scale. The surface finish of the shaft should be smooth enough to maintain correct contact with the seal lip, but rough enough to form lubricant holding pockets, without causing excessive seal wear. The shaft end should have a burr-free lead-in. The recommended lead-in angle is 15 degrees. Generally, a plunge-ground shaft with a finish of Ra= 0.2 to 0.8 mm is recommended. The maximum shaft speed for effective seal operation depends on the seal type, but should never exceed the limit quoted by the seal manufacturer. As an alternative to finish grinding or other form of shaft repair, the CR Speedi-Sleeve can provide an instant high quality running surface.

The seal usually has a tight fit in the housing bore so that the outside diameter, (O.D.) of the seal must be larger than the housing bore diameter. The bore should be machined to a surface roughness of Ra=3,2 mm or smoother. Such surfaces are adequate to prevent leakage between the seals outside diameter and the bore. The lead corner of the bore should have a 15-30 degree chamfer and should be free of burrs. Bore sealant is not required if a coating is in place on the seal O.D. However, seals without an O.D. coating can be improved by applying a non-hardening, pliable sealant to the outside diameter before installation. Seal designs with a rubber outside diameter can be used to compensate for minor bore imperfections as well as differing rates of thermal expansion.

The environment plays a large role in seal performance. Outside factors, such as contamination, pressure, lubrication, temperature, speed, retained fluid and eccentricity, can prevent the seal from achieving optimum performance.

Even minute amounts of contaminants, such as water, dust or mud, entering the bearing area can pollute the lubricant, causing corrosion and premature bearing failure. Just 0.002 % moisture invading the lubricant cuts bearing life almost in half.

Shaft seals perform best and last longest if pressure on both sides of the seal is the same. If pressure increases on the lip side, it causes distortion of the lip and heat to generate due to friction.

Lip seals need lubrication to avoid direct contact between the shaft and lip. As sump temperature or speed increases, the film of lubricant between the seal and shaft becomes thinner and can break down. When this contact occurs it results in heavy wear. This ultimately permits leakage and destroys the seal.

The maximum speed at which a seal can be most effective varies by design and operating conditions. The fluid to be retained must be compatible with the seal lip or the rubber may swell, resulting in loss of strength.

There are two types of eccentricity: shaft-to-bore misalignment (STBM ) and dynamic runout (DRO). The distance by which the centre line of the shaft is off-set from the centre of the bore is STBM. DRO is the amount by which the shaft does not rotate about the true centre.

Bearing failures that may be seal-related

The majority of bearing failures are premature, and the most common cause is improper lubrication and contamination. While bearings can fail for reasons other than seal related, such as overheating or excessive vibrations, the following failure conditions warrant a close examination of the sealing system.

Small indentations, worn surfaces and a darkening of the lubricant indicate the presence of contamination.

Greyish-black streaks across the raceways indicate that water has penetrated the bearing during static conditions. General rust indicates the presence of water or other corrosive substances.

Seal selection must be based upon a thorough review of the application parameters, the environmental factors, and the primary sealing function. The following sealing systems provide a glimpse of the variety of seals available to accomplish a specific task. Although, there are others, these are the most common types.

Grease tends to stay in position. It will only become liquid at fairly high temperatures and even then its viscosity will probably be higher than other lubricants. Any good shaft seal, with or without spring loading, will generally serve to retain grease.

Because of its fluid character, oil is more difficult to retain than grease. It normally requires some type of spring-loaded seal. The CRW1 is a seal in which the lip is moulded in the shape of a sine wave, with an effect to pump oil back into the sump while excluding contaminants from the bearing. As the lip has a wavy motion on the shaft, heat and wear are spread over a larger area than they would be using a conventional straight-lip seal.

Radial Shaft Seals are most effective at holding back material in the direction the lip is facing. So, if the main function is to exclude contaminants, then the lip should point to the source of contamination. The V-ring is an excellent excluder because it rotates with the shaft, throwing off contaminants. It also minimises frictional heat and torque.

Where an application requires the seal to perform multiple functions, different seal types can be used in combination. For example, for retaining oil and excluding heavy contamination, a Waveseal can be used for fluid retention in with a V-ring for exclusion of contaminants.

Where a shaft assembly or space limitations make it difficult or even impossible to install a large diameter seal by passing it over the end of the shaft, a split seal can be used. This is designed to be placed around the shaft and then be connected and compressed by a cover plate.

Improper installation is the most common reason for premature seal failure. Early leakage usually arises during the installation period. The seal may be allowed to get dirty, the lip is not lubricated properly at the start, or the fitter does not use the correct tool to seat the seal fully in the housing. No matter how well constructed a seal is, or how well suited it is for an application, incorrect installation will prevent it from performing properly.