» Service with a future 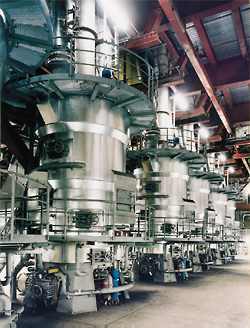 Service with a future

A long-term maintenance contract between a South African and a German company pushes the boundaries of out-sourcing arrangements.

Long relationship
keeps grinders rolling
SKF has been involved with the coal mills of Babcock Kraftwerkstechnik for many years. With a new ten-year maintenance contract between Babcock and South African chemical giant Sasol, the role of SKF as a regular, reliable supplier is again essential. Each of the mills has three grinders, and each of the grinders has two SKF bearings. The larger is a NU 3172 ECMA cylindrical roller bearing, and the smaller a 24148 CC spherical roller bearing, both splash-lubricated with oil, which both Babcock and SKF believe produces better lubrication and longer bearing life than grease, even if it requires more careful operational and maintenance procedures.
There was close cooperation over the original design of the bearings for the coal mill grinders that are currently used in Sasol’s Secunda plant and elsewhere. In addition, SKF was intensively involved in solving problems in the design of the bearings for crusher mills. Indeed, Gregor Thomassen, who is now Babcock’s product manager, remembers working for Babcock with SKF back in the 1970s.

A long-term maintenance contract between a South African and a German company pushes the boundaries of out-sourcing arrangements.

It’s a leap of faith for a major manufacturer to allow an essential element of its processes out of its control, but that’s what the South African chemical giant Sasol has done. It’s given Babcock Kraftwerkstechnik GmbH a 10-year contract to maintain its coal pulverisers. And if Babcock can’t keep 68 pulverisers providing powdered coal to the 17 boilers, then Sasol’s production is threatened, due to lack of steam for the processes involved.
But faith comes from trust, and Sasol has reason to trust Babcock power station technology, which built 16 of the company’s 17 boilers in the late 1970s and early 1980s. Since then, there have been periods when Babcock has been involved in the maintenance of the boilers, as Sasol’s management policy changed. In the past few years, Babcock has become increasingly involved in the process of keeping the boiler plant going. Now Sasol has decided that maintenance of the coal pulverisers is not part of its core business, and that it would be better to give the task to a company that is centrally involved in the field.
Deutsche Babcock is one of the world’s leading engineering companies. The original company was founded in the United States in 1867 by George Herman Babcock and Stephen Wilcox, and the German branch made its first boiler 100 years ago, in 1898. Deutsche Babcock became entirely independent in 1975, and the Deutsche Babcock group now turns over about 9 billion marks (US$5 billion) a year and employs 28,000 people worldwide.
Babcock Kraftwerkstechnik is based in the old industrial city of Oberhausen in the Ruhr area of Germany, where Deutsche Babcock’s headquarters is also situated.
It is the subsidiary that specialises in the manufacture, modernisation and servicing of power stations. With factories and service facilities worldwide, the company and its 5,400 employees are able to provide full service throughout Europe, Asia and Africa. Babcock’s subsidiary DB Riley covers the North American market.
Sasol Synthetic Fuels (Pty) Ltd is one of six main subsidiaries of the Sasol Group. Sasol is situated about 150 kilometres east of Johannesburg in Secunda in the Mpumalanga province. Using coal as raw material, the company produces high-quality synthetic fuels such as petrol, diesel, kerosene, gas and furnace oils. It is known for the Sasol process, which was originally based on a combination of the German fixed-bed and the American fluid-bed Fischer-Tropsch processes. Besides the range of liquid fuels, Sasol produces more than 120 chemical products for the local and international markets. The company currently supplies 41 percent of South Africa’s liquid fuel requirements and as a result of the company’s activities, the South African economy benefits substantially. Inclusive of import savings, Sasol’s foreign exchange earnings for 1997 exceeded 12 billion rand (US$2 billion).

Steam in quantity
For the production of fuel and other chemicals, the factory needs steam, which is supplied by 17 coal-fired boilers situated on one edge of the huge Sasol complex. Each of the boilers produces 540 tonnes of steam per hour, and is fed by four coal mills that pulverise the coal needed to power the boilers. Which means, for the 17 boilers, a total of 68 mills processing 11.2 million tonnes of coal a year. The maintenance and spare parts for these crushers, together with their bunkers, feeders and distributors are covered by the new contract.
Before the contract started at the beginning of 1996, maintenance was carried out at the Secunda plant in the usual way: A service company was called in to carry out a specific repair, or a specific maintenance operation, or a scheduled overhaul or inspection. Sometimes a contract might be offered for a year or two. “What’s unusual about this contract,” says Babcock’s Gregor Thomassen, the product manager who negotiated the deal, “is that it is for 10 years, and it covers every aspect of the maintenance activities.”
The contract closely ties Babcock to the success or failure of the machinery it services. “It’s a contract with bonuses and penalties,” says Thomassen. The company gets paid on results – if the coal keeps moving, that’s good. If the mills don’t work up to scratch or there’s a pollution incident, then Babcock suffers penalties. If Babcock thinks up something that reduces costs, then Babcock gets some of the savings. It’s a breakthrough deal, and it’s already been recognised by South African boiler plant operators with a Best Practice award.
These coal mills work by passing the coal between grinding rollers and a grinding bed. Each mill has three rollers, whose grinding surfaces look like large tyres, which are cast out of NiHard or HiChrome, special wear-resistant materials. Once the coal is pulverised, it is dried by hot air and blown up from the mill to the furnace. At the top of the mill, the coal dust passes through a classifier so that any remaining coarse particles can be returned to the grinders. “The coal used for steam generation in Sasol is high in ash and moisture content with a high percentage of abrasive material,” Thomassen says. “That means the roller tyres only last about 12 months. That’s one reason why this contract is particularly worthwhile for Sasol, because of the intensity of the need for service.”
Babcock’s project engineer, Harald Rudolf, says the company is improving the efficiency of the replacement programme: The grinder tyres are being replaced as they come up for renewal with a new design that is easier to fit and can be manufactured with less waste of the expensive cast material. “This modification only makes sense in a long-term contract where the investment can be justified,” Rudolf says.

Local manufacture
Part of the agreement is that as much as possible of the manufacture of spare parts is done in South Africa. Some 130 employees work directly for Babcock Kraftwerkstechnik at the Secunda plant. Many of these were previously employed by Sasol. The two managers there are typical of the nature of the cooperation. Danie Krüger, Babcock’s resident manager, was involved in the negotiations from the start on the Babcock side, while engineering manager Louis Fourie was part of the Sasol management. Whatever can’t be manufactured in South Africa is provided by the company’s factories around the world.
For Sasol, the benefits of out-sourcing the maintenance of the coal mills are clear. For Babcock Kraftwerkstechnik, the contract offers a new perspective at a time when contracts for new power stations are hard to come by. The industrial world has an overcapacity of electrical production, and although there are new power stations being built in such countries as China and India, the world market is not growing. That makes it all the more important for Babcock and similar companies to secure a future for themselves with long-term maintenance contracts. Babcock is in a position to offer full-service packages, including maintenance and repair of equipment made by other manufacturers (as is the case with one of the boilers at Secunda). Thomassen says he hopes that the Sasol contract will prove to be a model for future deals, and that Sasol itself might move towards entrusting the whole of its boiler plant to the experts from Oberhausen.