» Stuck between the pages 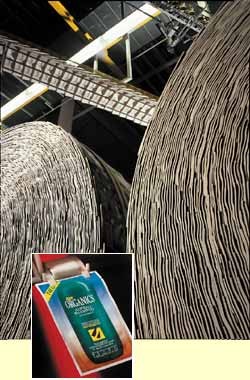 Stuck between the pages

Self-aligning bearings compensate bending
Ferag’s use of the drum as its processing equipment standard results in dozens of different SKF bearings in Ferag equipment. The main shaft of the gatherer-stitcher-drum, for example, runs on two standard 2211 self-aligning ball bearings with plastic cages. The bearings, greased and sealed at the factory, offer reliable maintenance- free service over the unit’s life. They are designed to compensate for any bending in the long, heavily loaded shaft as it turns.
In 1994, Ferag asked SKF to develop a new maintenance-free spherical plain bearing for its conveyor system that would deal with the sharp increase in throughput speeds and newspaper weights. The bearings, which are also self-aligning, connect the links in the chain that carries the plastic clips from which the printed sheets hang.
The two companies collaborated to develop a new heavy-duty bearing, now another Ferag standard.

How does a sample of shampoo or a CD end up inside a magazine? Ferag has the answer to that and many other post-printing predicaments.Swiss engineer Walter Reist saw his chance back in the 1950s and took it. As the story goes, when his employer declined a printer’s request for an improved version of a conveyor belt for the printing industry, Reist responded. He ended up developing the first conveyor belt system for smudge-free print products.
According to Jürg Marti, a spokesman for Ferag, the company that Reist went on to found, the timing of the invention was perfect. “The trick was to hold each sheet of paper by its edges so that the inked parts of the page remained untouched – and that was an important advantage in the days when ink took ages to dry,” he observes.
Perhaps it was lucky for the printing industry that Reist’s original employer didn’t want that job. Today, the Ferag group, based in Hinwil near Zurich, has additional plants in Switzerland and others in Germany and the Netherlands. Since 1957, Ferag has specialised in the development of innovative solutions in post-press processing.

Changing magazines
The worldwide use of Ferag’s equipment and its 3,000 patents bear witness to the company’s progress. Although the founder’s daughter, Susanne Rau-Reist, now heads the company, Reist still works in the background and provides many of the creative impulses with which the company responds to the dramatic changes within the printing industry.
One of those is the increase in the size of magazines and newspapers in the past 20 years. A total of 300 to 400 pages is not unusual for a magazine today. Other enhancements range from the likely insertion of a CD-ROM or a sample of shampoo to the certainty of several colourful advertising brochures.
Meanwhile, substantial consolidation has occurred within the publishing industry as principal companies absorb local titles and local publishers unite as groups. The result is that many products are now integrated into larger operations. Several newspapers, for example, may share some editorial elements while each has exclusive local coverage.
In addition, printing presses have advanced technologically with speeds and quantities today that were unimaginable only a few years ago. Machines that can produce 80,000 sheets an hour set high demands on post-press processing.

Speed and flexibility
Once Ferag developed a new handling principle, speed and flexibility emerged as its two new watchwords. Instead of treating the flow of printed material as a single entity, each copy is handled separately, and the processing uses a rotational technique. In a Ferag plant, the newspapers and magazines do not move around the building on conveyor belts; each item hangs from its own bright-yellow plastic clip running on a kind of miniature railway. When the flow of product approaches a processing machine, each item is gently transferred onto a drum where the processing is carried out and then taken up again by another clip to move to the next stage.
Heinz Büchi, the engineer in charge of machine assembly, says that using a drum for each processing stage outweighs other existing methods. “On a conveyor belt, the product has to be shifted and moved from one direction to another; the flow of product is always being braked and accelerated in order to reach the operating speed of each machine,” he says. “If you use a carousel, where the paper is laid on the outside of the cylinder, the paper has to move at a very high speed and the centrifugal forces involved are considerable.”
The drum, according to Büchi, is a gentler method. It rotates rather slowly while achieving high throughput speeds because the printed items are arranged around the drum’s axle like a wheel’s spokes. Each item is secured in its own pocket or over a saddle. That arrangement means the distance between each item is only a matter of centimetres, which results in the low turning speed.
But Büchi is particularly proud of the control system, which he terms “a work of genius.” He says he likes its “clever little tricks to make everything work just right,” which he won’t reveal for competitive reasons.
Once the ink is on the paper, Ferag provides everything the printer needs – conveyor systems, storage systems, trimming systems, methods of assembling a publication and packaging systems – all designed for maximum speed and flexibility.

Pieces of a puzzle
The whole system’s intricacy and efficiency become obvious if the routes of the various parts of a newsmagazine are followed. Some parts may be printed in the same building earlier. Ferag makes the system by which they are stored on discs, rolls in which the signatures, up to 96 pages long, are layered one over the other like tiles on a roof. Other parts may be printed by other companies. The cover, on different paper, will be in bundles. There are some advertisers’ reply cards to be glued in, and an advertising supplement to go in loose.
They all arrive one by one, hanging from the conveyors on bright yellow clips, in the gatherer-stitcher-drum. Peter Caflisch, the engineer in charge of this drum’s assembly, says that the unit offers a high level of reliability with complete flexibility. Each element falls into place over the previous element, and the magazine is built up from the inside out as it moves along the drum from process to process.
“As each element in the magazine arrives at the machine, there are controls to check that it’s arrived properly,” Caflisch says. “As the elements are put together, there are controls to check that they’ve been put together properly. If there’s any error at any point, then nothing more is added to the faulty item as it makes its way along the machine. It won’t be stapled, and it’ll be thrown out at the end. But the error rate is only a few per thousand.”
From there, the magazine moves to the trimming drum to tidy up its three open edges and finally to the packaging unit, where bundled and strapped packages are prepared for delivery.
Newspapers go through a similar process with one important difference – the newspaper-packaging unit is able to assemble customer-defined packages for distribution. The delivery driver checks in at the porter’s office with a chip-card and his packages are ready to load by the time he arrives at the ramp.

Michael Lawton
a business journalist based in Cologne
photos Ferag