» Tilting towards the future 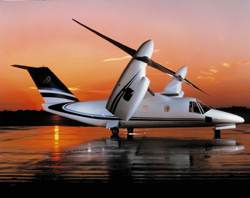 Tilting towards the future

The right stuff
Reliable bearings of high quality are critical to the tilt-rotor concept. Keeping the quality of each individual part to a level that can provide adequate safety to the passengers on the 609 is a big challenge.
SKF will provide about 25 different bearings for the 609 – most of them for the prop-rotor gearbox, says J.C. Morris, Bell Helicopter’s manager of procurement. This complex unit carries the power from the engine to the prop-rotor and has to work whether it is vertical or horizontal.
These bearings include duplex and triplex bearings, roller bearings and planetary bearings. MRC Bearings, a company within the SKF Group, produces the bearings at its Falconer plant in Jamestown, New York, while the precision balls used in them are produced in MRC’s Colebrook plant in Winstead, Connecticut.
Within the prop-rotor gearbox, the bearings support shafts that take the power from the engines – up to 1,450 kW from each of two – and transmit it to the 7.9-metre diameter prop-rotors.
Another major bearing component, produced by SKF Avio at its factory in Villar Perosa, Italy, is the main rotor mast bearing, which carries the load of the prop-rotor. The main rotor masts – there are two of them on each aircraft – are what tie the aircraft’s wing and fuselage to the whirling rotors, which provide lift and propulsion.
Since each rotor will revolve at the order of 400 to 500 times each minute of flight, the bearings have to transmit the movement while at the same time supporting the 7.2-tonne weight of the aircraft.

Part helicopter, part airplane, it will take off vertically yet be able to fly forward at high speed. The Bell 609 is the first tilt-rotor aircraft for civil aviation.There has never been an aircraft like the Bell 609. It’s a helicopter one minute, an airplane the next. It can hover over one spot, but also fly long distances with the speed of a modern turboprop airplane. And it will begin commercial service in less than four years.
For some 50 years Bell Helicopter Textron has been working to bring the tilt-rotor concept, in the form of the new 609, to the verge of practical business use. The 609’s larger cousin, the Bell Boeing V-22 Osprey, is entering production for the U.S. military.
Both of these aircraft embody a design concept called “powered lift,” a concept that is distinctly different from that found in traditional helicopters. Helicopters gain their ability to fly vertically and hover from the lift generated when a long, thin “wing,” or rotor, is moved rapidly through the air in a circle. During each cycle the helicopter rotor continuously changes the angle at which it meets the air.
On a powered-lift aircraft, the vehicle’s two rotors are mounted in units called nacelles, on the tips of the aircraft’s wings. When the tilt-rotor begins flight, they act like helicopter rotors, changing pitch continuously as the rotor revolves.
Once aloft, however, the two nacelles, each of which contains an engine, rotate 90 degrees forward and the rotors are slowed so that they act like airplane propellers, which do not change their pitch with each rotation. On the 609, a computer system takes over the rotors’ cyclical control, and it can, if necessary, allow the blades to change pitch on each revolution, even when they are in the propeller mode.
The innovative design will allow the 609 to fly forward at speeds much greater than any conventional helicopter, while retaining all of the helicopter’s ability to take off and land vertically and hover.

50 years in the making
This dream of combining the speed of an airplane with the special flight capabilities of a helicopter was voiced as far back as the mid-1940s by the late Larry Bell, founder of the original Bell Aircraft Co. He predicted the Convert-O-Plane, as he called it, would revolutionise the way aircraft could be used.
Bell, a pioneer aviator, founded Bell Aircraft in the mid-1930s to build military fighters. In 1941, he bought the designs and services of Arthur Young, who had spent more than a decade working on the problem of vertical flight. Young’s concepts proved successful and were developed into the famous Bell 47, Huey and Cobra helicopters, which are used by operators around the world.
In the 1950s Bell’s helicopter operations were separated from the original Bell aircraft, and in the 1960s the helicopter company was purchased by the U.S. holding company Textron.
Today, Bell builds a wide variety of helicopters from factories in Fort Worth, Texas, where the company headquarters are located, and in Mirabel, Quebec, Canada. The 609 and the V-22 Osprey, a military transport, will be assembled at a new factory in Amarillo, Texas. Bell recently announced that the 609 would also be assembled and marketed in Italy by Agusta S.p.A.
Bell died in 1954, but not before he saw the first successful tilt-rotor, the Bell XV-3, begin flight tests. Although successful, the XV-3 was only one of a number of developmental steps that would lead to the 609. It took another 30 years of testing and evaluation work before the XV-15, the ultimate tilt-rotor developmental aircraft, could be unveiled at the 1981 Paris Air Show.

Meeting market needs
“We analysed the potential markets and found that operators of medium-sized helicopters needed an aircraft with higher cruising speed and much longer range than anything now available,” says R. R. (Ron) Reber, Bell Helicopter Textron’s manager of Civil Tilt-Rotor Business Development.
“So we designed the nine-passenger 609 to meet the needs of the market with the largest demand,” Reber explains. “It is a market we know well, having sold many helicopters in that size range, so we didn’t have to develop the knowledge of how to compete for this size aircraft.
“Also, a medium-sized, nine-passenger tilt-rotor will be able to use existing heliports around the world. We won’t have to go out and attempt to get larger heliports built immediately. We can let the system grow with the aircraft.”
Primarily designed as an executive transport, the 609 will be able to beat the time of almost every turboprop aircraft from office to office inside a 800-kilometre radius. “It will be as productive as a conventional 18-passenger helicopter because it will be at least twice as fast,” Reber says.
The 609’s Canadian-built Pratt&Whitney PT6C-67A gas turbine engines were selected the same way. Bell surveyed the potential market, offering a choice of a new high-technology engine, which is not yet in service, or the 30-year-old PT6 design.
“Our customers told us they wanted the proven engine with the experience of some 40,000 units operating worldwide,” Reber says. Although it is an older design, the PT6s on the 609 will be equipped with full-authority digital electronic engine controls, the latest in power-control technology.
In other cases, Bell has taken the newest technology and embodied it in the 609 design. The “fly-by-wire” electronic control system in the aircraft is based on the system used in the newest Boeing 777 airliner. This system has already demonstrated its ability to operate in the 777 with only one failure every 10 billion cycles. The 609 also will have ultra-modern electronic instrument displays for the flight crew.

Certification anticipated
The first 609 is scheduled to fly in the summer of 2000 and is expected to receive certification from the U.S. Federal Aviation Administration and comparable European authorities in 2002, clearing the way for its sale and commercial use. Bell plans to have the 609 cleared for two-pilot operation in inclement weather and known icing conditions when it is first certified and later for single-pilot operation in these conditions.
In the event an emergency landing is necessary, the 609 can auto-rotate safely on its rotors, like any other helicopter. But it can also make run-on landings like a conventional airplane. And if it should be forced down at sea, flotation bags will automatically deploy from the wingtip-mounted nacelles to convert the aircraft into an outrigger-equipped boat for added stability.
Already more than 70 customers have put down cash deposits on 609s with more than half of these buyers being located outside the U.S. Most of these international customers are in Europe, the Middle East and Asia.
The U.S. Coast Guard, which is charged with life-saving and rescue duties on the coasts, is looking at the 609 as a possible replacement for several types of helicopters and small jet aircraft that it now operates. The 609 will be able to reach far offshore to shipwreck sites as fast as the present jets and then will be able to land and rescue the victims. The jets now used can only drop rescue equipment and mark the site for surface vessels.
The U.S. Border Patrol sees the tilt-wing as an ideal anti-drug smuggling aircraft, which will be able to follow smugglers’ aircraft to their landing site and then land in the small areas used for these illegal activities before the smugglers can escape.
Bell plans to build up its production rate for the 609 over the first few years to about 60 aircraft per year. By the time the aircraft enters production and the first deliveries are made, Bell hopes to have a production backlog of about three years.