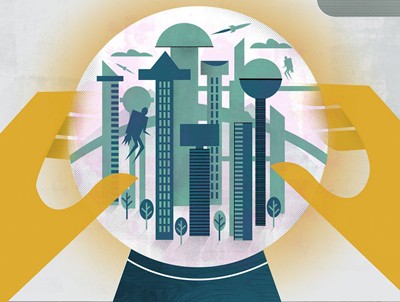 Alan Begg, senior vice-president of SKF Group Technology Development:
“I believe energy efficiency will remain a key driver in any technological development, and electronics and communications technology will become an ever more dominant part of our lives. My prediction is that these two factors will converge upon the more sedate world of mechan­ical technology, resulting in some powerful innovations.
“Just imagine, instead of sending a bearing off to a windmill and hoping it will be installed and used optimally, you specify an ‘intelligent’ bearing that sends a message every time something happens to it – an electronic ‘postcard’, if you will. The first postcard you receive from the bearing might say, ‘I’m joining the following parts to make a windmill.’ Later, you might receive other messages, perhaps needing action: ‘I’m incorrectly installed on the shaft,’ reports the bearing, or ‘the maximum load is not what the installer told you!’ The messages could continue throughout the life of the bearing, enabling constant monitoring and truly maximizing the efficiency of the operation. ‘I can keep going for another three months,’ the bearing might report towards the end of its life. ‘Please organize my replacement.’
“All of this could be achieved via wireless electronics, and, considering the improvements to efficiency and energy management that technology like this would offer, it seems likely that we will develop these kinds of products over the next 25 years.”

Silicon Valley has been the birthplace of many of today’s must-have technologies, and it’s here that Mike Liebhold, a distinguished fellow at the non-profit Institute for the Future (IFTF), researches future digital technologies and how they might impact on humans. He expects two technological revolutions in the coming 25 years.

The first is what he calls “supercharged interaction”, using the Internet cloud as a supercomputer. “The power of the cloud supercomputer can amplify human commun­ications,” explains Liebhold, whose career includes positions at Apple and Intel. “For example, language translation and speech-to-text are computationally very intensive because the computer compares the sound of your voice against millions of samples. That demands very rapid parallel computing, and the cloud is ideal for this.”

The fact that Liebhold – who stresses that his role at IFTF is to offer foresight to customers, not to predict the future – is speaking with Evolution via Skype begs the question of how we would do the interview 25 years from now. “It’s possible using new materials that we’ll see digital displays on table tops or walls,” he says. To have a conversation with someone in another country you would walk up to a public display and, after biometric authentication using the pattern of your retina and the sound of your voice, access your digital workspace. “There will be less need to carry physical devices,” he says. “It’s being called ‘invisible computing’, where the world itself becomes digital.”

Liebhold says that the key to the technologies of the future will be collaborations across the borders of different technology areas and scientific fields. “Today, there are many technologies that alone are mature enough to cause great disruption. But it is the combined effect of these new developments that will continue to accelerate the pace of technological change.”