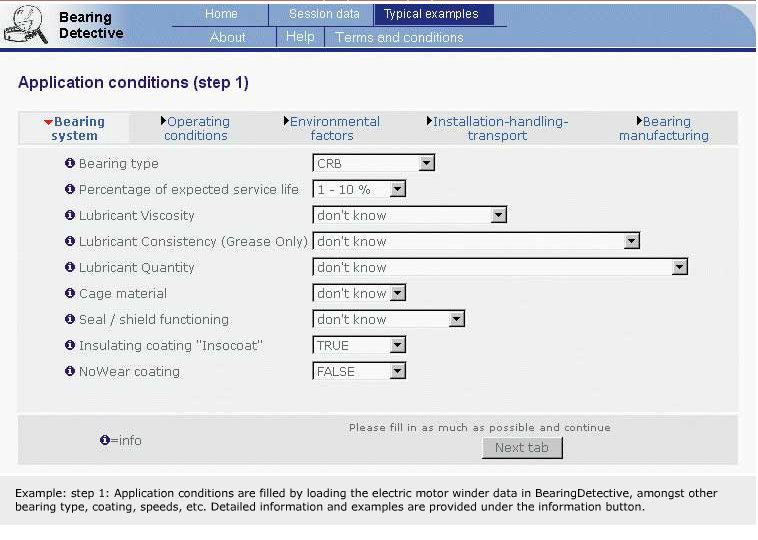 Current knowledge-based systems have benefited from the experience of expert systems developed in the 1980s, although these suffered major flaws in aspects of reasoning capacity and computer power. These systems were often structured as decision trees that led from symptoms to possible causes.

Causal relations between symptoms and possible reasons do not exist in reality and can easily lead to wrong conclusions. This is simply because the reasons (e.g., wrong bearing mounting) result in the damage symptoms (e.g., fretting signs), and not the other way around.

A modeling of a relationship from causes to symptoms where uncertainty is attached to “possible failure states” fits much better with the physical phenomena that occur during bearing service life. With the aid of state-of-the-art computational intelligence techniques, this approach has been followed for the development of the BearingDetective.

Analysis of bearing damage and failure is principally a diagnostic task. Imagine a patient visiting his doctor with a specific complaint. The doctor first questions the patient about specific body and life-style parameters such as weight, smoking, etc. (conditions). Based on that, the doctor makes hypotheses about likely diseases (failure modes). The doctor verifies or rejects these hypotheses through further questioning and inspection of the patient (symptoms).

The process of a damage or failure analysis is similar to the doctor’s approach. In a correct diagnosis, there are two reasoning steps:

With a probabilistic network, the two-step reasoning is implemented by forward and backward probability calculations.

The network for bearing failure analysis has four node categories: conditions, internal mechanisms, failure modes and observed symptoms. Conditions represent the conditions from and under which the bearing operates.

In the modeling of the network, various sources of information were used. Apart from defining the nodes, the causal relations and probabilities, explanation texts (for each node) including examples and pictures are developed. In total, about 250 pictures have been included in the system.

Calculation step 1
Hypothesis generation: Once the network is modeled, the reasoning process can start. The initial nodes (no inputs) have two or more states. Each state is assigned a “prior” probability between 0 and 1, with the total over the states being 1. For example:

In the system’s user interface, the user can state that acceleration is true. This will change the above probabilities into 1.0 and 0.0, respectively. In the network, conditional probability tables are defined (table 2).

When nodes have more states (more than only true and false) or when they have more input relations, the tables grow. With the conditional probability tables, the probabilities of the other nodes can be calculated by the formula:

Calculation step 2
Verification or rejection by inversion: After hypotheses are generated, we have to verify or reject them by investigating the bearing. This ranges from visual inspection of the bearing to simple or complex laboratory tests. For this purpose, one first has to explain how probabilities of observations will influence the probabilities of the failure hypotheses.

As this is causally different, one has to reason backwards. Without going into detail, the heart of this reasoning lies in the formula:

This states that the belief in hypothesis B obtaining evidence C can be computed by multiplying our previous belief P(B) by the conditional probability P(C|B) and that C is true if B is true. The conditional probabilities P(C|B) are modeled in the network as causal relation, P(B) comes from forward reasoning (step 1), and P(C) are set during the bearing investigations. These are the observations that serve as evidence for the failure hypotheses. P(B|C) is called the posterior probability, while P(B) is the prior probability.

The discriminating effect is determined by a mathematical measure. For all possible not-filled-in conditions or observations, this measure is scaled between 0 and 100. An example is given in the illustrations. Eventually, by investigating the application conditions and observations, the likelihood of the failure hypotheses and internal mechanisms are determined and ranked. These then form the conclusions of the bearing damage analysis.

The system is further extended with various functions that can help the user.

A simple file with user instructions is provided for getting started. The system offers translation of key terms into English, German, French and Swedish. Session data control is available for session data storage and retrieval. Also, through a file marked “Typical Examples,” users can be guided through the application of the program. For convenience, an extensive report can be generated in MS Word or HTML format, including the relevant conditions, observations and failure mode probabilities.

In this case, an electrically insulated cylindrical roller bearing NU 322 ECM/C3VL024 is used in an electric motor of a paper winder in the reel section of a tissue paper machine. The electric motor speed is variable (400 VAC with frequency converter) and running between 1000 and 1500 min-1. After only a month of operation however, heavy wear was observed on the inner and outer rings.

Loading the example case in BearingDetective sets all known application conditions (step 1). The first hypothesis of possible failure modes is calculated based on these application conditions. At this point in the analysis, BearingDetective gives a high likelihood of false brinelling, adhesive wear and current leakage. At first sight current leakage and false brinelling seem unlikely because the machine uses insulated bearings and all machines are properly supported with rubber pads.

The user then has to perform the second step of the analysis by inspecting the bearing on failure symptoms. Clicking “inspect” results in a list of damage symptoms most relevant to the selected failure mode.

The analysis is continued with inspecting of symptoms of adhesive wear. None of the symptoms related to adhesive wear are found either. Finally, by inspecting electrical current leakage symptoms, the presence of small pitting is found after magnification of the raceway surface. Online servicesResearch & Theory - do not use