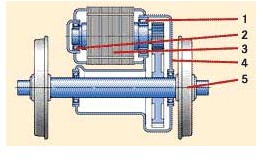 Although improvement to traction motor bearings has been a continuing process over many years, there are a number of developments that are particularly relevant to modern bearing designs for traction motor applications. These are as follows:

As applications become more sophisticated, more functions need to be packed into the space available. More demands are placed on the development of new materials, on improved product engineering and production, and on continued research for better mathematical modelling and other techniques to improve the performance and life of systems and components.
In traction motors applying the AC principle, space for bearings is restricted. Downsizing principles need to be applied to allow high maximum speeds. This demands greater integration of adjacent components into the overall bearing system, in order to meet the desired and increasingly stringent specifications. Coupled with this, customers are also looking for complete solutions for greasing, sealing and electrical insulation.

AC motors allow the development of traction motors with higher rotor speeds, greater compactness or increased power for a given size. Higher radial loads, especially those acting on the drive-side bearings, result from the increased motor torque derived from the increased traction power.

Higher axial forces act on the locating bearing because of the use of helical gearing and increased helix angles. This optimises gearbox design and efficiency, reducing size and minimising noise.

AC traction motors have led to the introduction of oil-lubricated bearings, particularly at the drive side (fig. 4). This reduces the overhang effect by reducing the distance between the pinion and the drive-side bearing. This causes a reduction of the resultant radial load and allows the use of smaller bearings with higher speed ratings. Oil lubrication also allows higher speed ratings than grease lubrication.

In addition, manufacturers and operators are looking for reduction in maintenance and longer re-greasing intervals, and in some cases going even as far as no re-greasing between overhauls. Service intervals can now be extended, sometimes to more than one million kilometres of operations. In addition the maintenance process itself has to be simplified. This included the initial mounting during construction.

Despite these changes, traction motor bearing design still relies mainly on the basic configuration of two cylindrical roller bearings. As in other vehicle applications such as trucks and cars, the tendency is now towards greater integration of components and more sophisticated electronic sensing and control systems.

TMBU for the non-drive side

The traction motor bearing unit for the non drive side (fig. 6) which supports radial and axial load has to be flanged on the rotor shaft and on the traction motor bearing shield. This design can incorporate all necessary sensing functions as well as electrical insulation. This unit is a “ready-to-mount” product which requires no further adjustment.

The opposite side bearing arrangement for this configuration can be achieved using an oil-lubricated cylindrical roller bearing. This supports only the radial load and is suitable for higher speeds. It does not require the re-greasing procedures of previous grease-lubricated arrangements.

The customer benefits of this design are:

TMBU for the drive side within the gearbox

For the other principal type of traction motor, the bearing unit for the drive side is situated in the gearbox (fig. 7). The unit is based on a flanged design and supports radial and axial loads. This bearing is oil lubricated and suitable for higher-speed operations.

For the opposite non drive side bearings, radial load is lower and these can be built with relatively smaller dimensions. Normally these bearings have grease lubrication to allow reasonably long lubrication intervals.

In this case the user benefits through the reduction in components and space requirements. This design is suitable for compact gearboxes and allows for higher speeds and increased radial and axial loads. Overall life-cycle cost is reduced, and there is the advantage of dealing with a single system supplier.