» Expansion around the world 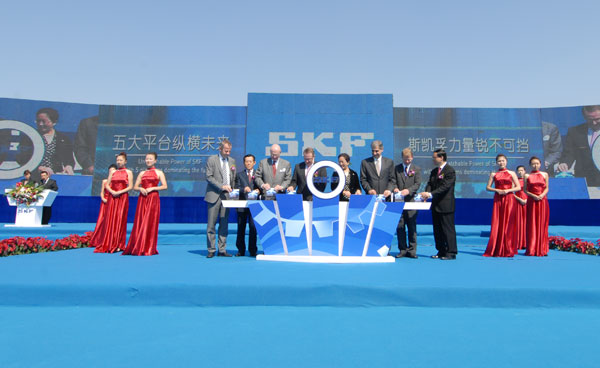 Brazil
In October 2011, SKF announced the latest extension to its factory in Cajamar, Brazil. The factory produces the second-generation hub bearing unit (HBU2) with integrated ABS (anti-locking brakes), supporting the Brazilian automotive market and the safety regulations that require that by 2014 all cars manufactured in Brazil must be fitted with ABS systems.

China
SKF has officially opened its second bearing factory in Dalian, China. The factory produces medium-size bearings, complementing the range of large bearings produced in the existing factory, which opened in 2006. The products will go to customers in a large variety of industries, such as the electric motor, industrial electrical, industrial transmission, metalworking, mining, mineral processing and cement, off-highway, pulp and paper and renewable energy industries.

“China is a very important market for the SKF Group,” says SKF President and CEO Tom Johnstone. “Our total investment for the two factories in Dalian will be about 160 million euros [$210 million], which fully supports our very positive development in the industrial market. We are bringing the latest technology to this facility, and this combined with our new Global Technical Center in China will enable us to more quickly develop new products and support the long-term technological development of Chinese industry.”

“India and Southeast Asia are very important markets for SKF,” explains Tom Johnstone, SKF President and CEO. “The opening of this center reinforces our commitment to support our customers in these fast-developing markets by bringing our core research and development close to them. This will enable us to develop new products to support their unique requirements.”

GTCI, which constitutes an investment of about $11 million, will employ approximately 400 engineers in the areas of product engineering and development and include laboratories for testing metallurgy, chemistry and bearing performance analysis.