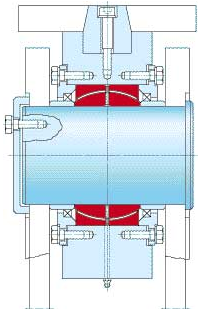 In 1988, a 45-tonne portal slewing crane built by Krupp Fördertechnik GmbH was the first to be equipped with a new generation of spherical plain bearings. SKF has developed this new series to meet the increasing requirements imposed on cranes and similar applications.

The spherical plain bearing as bearing element is used in a wide range of applications and has also been used extensively in crane systems. Its spherical sliding surfaces, available in various sliding material combinations, enable compensation for mounting inaccuracies as well as minimizing the effect of constraints and tilting moment forces set up by the elastic deformation of parts under load. In addition, it has been specially developed as a transfer element for high loads at relatively slow sliding movements.

In 1988, a 45-tonne crane built by Krupp Fördertechnik GmbH (formerly Orenstein & Koppel A.G.)
was put into service in Lübeck harbour by the Lübecker Hafengesellschaft mbH.The electrically driven, mobile, full gantry jib crane is designed for bulk, general-cargo, heavy load and container handling and can be equipped with remote-controlled lifting devices such as motor grabs, magnet or container spreaders.

The service weight is 390 tonnes and with maximum height 51 m. The crane handles 800 tonnes/h in motor grab operation or 30 containers per hour.

This crane was the first to be equipped with a new generation of spherical plain bearings, which are fitted to all the articulated joints of the jibs (figure 2). SKF has developed this new series to meet the increasing requirements imposed on cranes and similar applications.

The spherical plain bearing has been successfully used in crane applications for many years. Its sphered sliding surfaces, available in various material combinations, enable mounting inaccuracies to be compensated for the effect of constraints and tilting moment forces set up by the elastic deformation of parts under load to be neutralised. The bearing has been specially developed to support heavy loads while performing relatively slow sliding movements.

Selection of the appropriate sliding surface combination for the bearing is dictated by the operating conditions, including the loading and environmental effects on the bearing arrangement. With respect to the type of load the following general rule applies:

Developments in modern crane technology have meant that nearly all jib bearings are subjected alternately to both kinds of load.

Advances in calculation methods allow all component parts as well as the component material properties to be better utilised. However, due to the extremely compact framework design of the jibs, a relatively elastic crane structure is obtained.

When such a jib structure under full load is suddenly unloaded (e.g. in magnet or grab operation), such high inertia forces are released in the various jibs, that the bearings will be subjected to considerable alternating loads. In practice, each time this happens high-frequency vibrations will be imposed during the short period when the load alternates (see figure 3).

When handling unitised goods including heavy containers, by contrast, the bearings are under single direction load almost exclusively because the goods are moved slowly and set down carefully. As containers are generally packed to the full, the cranes operate almost continuously under maximum load conditions. The original standardised load distribution is a thing of the past.

Crane designers have to consider current requirements for short handling times and larger volumes per time unit. Heavier loads must be moved faster. Accelerations and decelerations while the crane is slewing cause significant additional axial forces in the bearings (figure 4). Operators have even been known to equip cranes with ‘turbo drives’ in order to accelerate the various movements.

Previously, the basically constant load directory precluded the use of steel-on-steel spherical plain bearings in harbour cranes. The necessary lubricating grease would be quickly forced out of the loaded zone under such operating conditions. This would result in lubricant starvation in the heavily loaded zone, increased friction between the sliding compact surfaces of the bearing, smearing, cold welding and ultimately even fracture of the bearing parts. Even very frequent relubrication would not be able to alleviate this situation.

This explains the long-established use of maintenance-free bearing arrangements in cranes and experience has been gained with several types of maintenance-free spherical plain bearing. In the past few years, however, none of the sliding surface combinations was found to give complete satisfaction.

Even the use of bearings with a sliding layer of high-strength PTFE fabric the SKF design which is the most highly developed, led to problems. Their service life is in some cases proved considerably shorter than might have been expected. Bearing failures were caused not so much by normally expected wear as by destruction or separation of the PTFE fabric layer, a phenomenon that can be ascribed to the more demanding operating conditions.

The bearing arrangement sealing has also had to meet increased demands. If seal damage remains unnoticed over a long period of time and the seals are not replaced, the bearing sliding contact surfaces will be quickly destroyed by corrosion and dirt.

Grease packed between the bearing and the outer seal would undoubtedly improve the sealing effect. However, grease does more harm than good to the PTFE fabric layer if it enters the sliding contact and would probably further shorten the service life: a vicious circle!

Times have become hard for spherical plain bearings in crane applications. Unless bearing performance can be adapted to meet the increased requirements, it will not be possible to fully exploit the advantages of state-of-the-art crane technology.

That is why bearings had to be developed that

For the new bearing design, PTFE composite (glass-fibre reinforced polyamide 6.6 containing PTFE) was chosen from the known sliding materials. This material has proved its excellence for over 25 years in a wide variety of applications and has fulfilled all demands.

Bearings of the new series are characterised by a particularly wide and low cross section and meet the application-dependent requirements for high axial and radial load carrying capacity and compact design. The bore and outside diameters conform to DIN 648, Dimension Series K.

The bearings consist of a one-piece inner ring and a radially split outer ring. One sliding shell of PTFE composite snapped in and glued to each outer ring half made of C35 hardened steel (Material No. 1.0301). The sliding shells are retained by flanges at both sides of the ring.

To allow for both the deposition of wear and dirt particles as well as regreasing, an angular lubrication groove is provided on the ‘equator’ and axial grooves are provided in the sliding surfaces.
The inner ring is made of carbon chromium steel, hardened and ground; The sliding surface is hard chromium plated and polished. The bearings can be regreased via holes in both inner and outer rings.

In the crane described here, the bearing locations 1–7 (see figure 2 or 3) were equipped with spherical plain bearings of the new series in March 1988.

The bearing appropriate sizes were selected in close cooperation with Krupp Fördertechnik GmbH based on laboratory and practical experience to give the required service life.

For the sliding surface combination used, frictional, wear and service life are directly related to the magnitude of the load and the total requisite sliding distance. To obtain the required life it was necessary to check the specific bearing loads.

The table on page 28 shows the individual bearing sizes and the specific surface pressures in the bearings under maximum load.

The design of the bearing arrangement for positions 1 and 2 is shown in figure 6. All other bearing arrangements are similar. The stub axle is machined to tolerance k6 and the housing bore to tolerance H7. Both outer ring halves are secured axially by the housing cover. The position of the inner ring is determined by spacer sleeves. Each end cover contains a radial shaft seal. When mounting the space between bearing and seal is filled with SKF lithium soap grease LGEP 2.

Here, too, the grease obviously improves the sliding performance of the bearing, however, its main purpose is to ensure sealing, prevent corrosion and lubricate the sealing lip. The grease filling is checked once or twice per year and supplemented if necessary.

The effectiveness of arrangement design is most easily demonstrated by examples which have successfully stood the test of practical use. The bearings of the Lnbeck harbour crane have been regularly inspected.
The accumulated sliding distances after 1,000 hours of operation were already of the order of 30 to 80 km (see table). There was no indication of measurable wear on the sliding surfaces. After some six years of operation the bearings are still in excellent condition.

The results exceeds all expectations; the sliding distances corresponding to the requisite lives have been far surpassed.

SKF is on the right course with the new series GEP .. FS and has a generation of bearings which has now also proved its outstanding suitability in other critical applications in addition to harbour cranes.