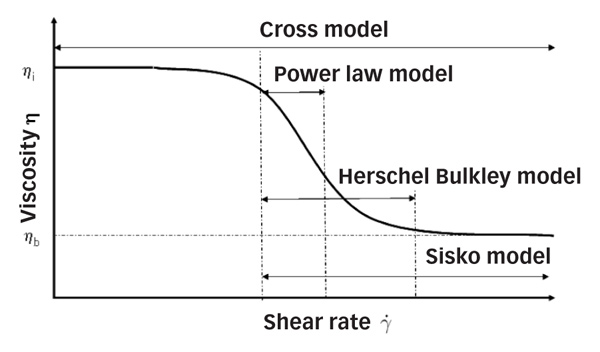 Lubricating grease shows visco-elastic behavior, meaning that the viscosity of the grease is a function of both shear and shear rate. Fig. 2 shows viscosity as a function of shear rate in terms of the various models that are often used. It shows that the viscosity is very high at low shear rates. This means that the resistance to flow will be very high if the grease is not touched – i.e., when it is located in the upswept volume. This property is also called consistency. During the churning phase the grease may lose some of its consistency. This property is called mechanical stability.

The viscosity of lubricating grease is so high at very low shear rates that only creep flow will occur, and the grease has an apparently solid behavior. As shown in fig. 2, grease shows shear thinning, which is when the grease viscosity decreases substantially with increasing shear.

Together with oil bleeding this is the reason why the film thickness in grease-lubricated bearings is usually calculated using the base oil viscosity, ηoil.

The grease rheology can be described using various models depicted in fig. 2.

Dynamic behavior
Starved lubrication will cause a decrease in film thickness that will proceed until the bearing is no longer well lubricated. Metal-to-metal contact will cause bearing damage or may cause enough heat development to occur to reduce the viscosity of the lubricant close to the contact for replenishment, leading to an event. In the latter case, the film thickness will increase again, resulting in sufficient lubrication until the next event takes place. This may occur a number of times, depending on the healing ability of the grease, which is a function of the ability of the grease to maintain its fluidity. Fig. 4 shows an example of the temperature profile of a cylindrical roller bearing running under self-induced temperature [14].

Grease life and relubrication
Grease life is defined by the point in time where the grease can no longer lubricate the bearing. This time may be very long and therefore difficult to measure in a bearing test rig. To accelerate such a test, the outer ring of the test bearing is heated, which accelerates the aging process and reduces the viscosity of the grease. An example of such a test rig is the R0F+ grease life tester [13].

Grease life models
Various models exist that can be used to predict grease life (or relubrication intervals). All models are empirical, based on grease life tests. Grease life is defined as the L10 life: the time at which 10% of a large population of bearings have failed. Relubrication should be carried out before the end of grease life so that no damage to the bearing has taken place. The SKF relubrication model is based on L01, assuming L10 = 2.7 L01, which is the time where only 1% failure would take place. Relubrication is not straightforward. Too much grease will keep the bearing in the churning phase, with high frictional losses and high temperatures. Fig. 5 shows the grease life for lightly loaded capped deep groove ball bearings as a function of rotational speed, mean bearing diameter, operating temperature and grease type (grease performance factor). Correction factors can be applied for the impact of load. Models for other bearing types are based on this model where other correction factors are applied. These can be found in the SKF rolling bearings catalog [1].

Aging
Both the mechanical and chemical properties of the grease will change while the grease is exposed to milling and oxidation in the bearing. The type of oxidation depends on the operating conditions: Physical aging dominates at lower temperatures and higher speeds, whereas chemical aging dominates at high temperatures [9]. Physical aging results in a change to the grease’s rheological properties, which results in leakage, reduced bleeding properties and a reduction in its ability to replenish the contacts. Chemical aging is primarily caused by oxidation. Anti-oxidants retard this process, but when these are consumed, oxidation leads to a loss of lubricant due to a reaction into volatile products and to lacquer formation, which no longer lubricates the bearing [9].

The design is given by the flow properties of the grease, also called pumpability. SKF has developed a grease pumpability test program that considers various aspects, which are listed below with the SKF test method in parentheses:

Conclusions
Over the past few decades SKF’s knowledge about grease has improved substantially. Today it is possible to predict to a good extent the lubricating life of grease and to monitor its remaining life. Sealing prolongs the service life of the bearing in contaminated environments where the grease provides an additional sealing effect. Lubricating systems can be used to provide the bearing occasionally with fresh grease.