» Optics made to measure 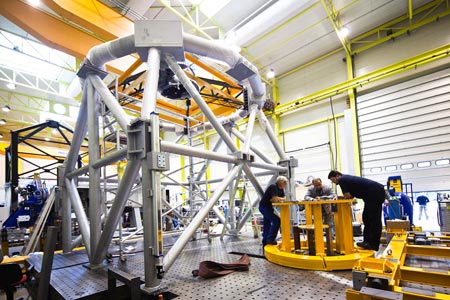 In 2004, when astronomers first observed the planet 2M1207b, the first directly imaged planet outside our solar system, it was through the tele-scopes at La Silla Paranal Observatory in Chile. In one of its facilities, the observatory is using optics made by Advanced Mechanical and Optical Systems, or AMOS, for its 12-foot telescope. Now another telescope with a 12-foot-wide mirror, made for ARIES, the Aryabhatta Research Institute of Observational Sciences in northern India, is about to journey from the AMOS plant in Belgium to Devasthal, a 8,200-foot-high mountain in Uttarakhand, where ARIES is situated.

“It is not only technical requirements that must be fulfilled,” says Jean-Pierre Chisogne, sales and marketing director at AMOS. Chisogne has test-driven the final 250 miles, right to the location of Devasthal. “We have to find out how our products can be transported to their destinations, and that has an impact on the design and the lead time.

“At every curve my colleague said ‘no way,’” he continues, remembering the trip up the mountain, “but it will work, despite the narrow roads and the cows blocking the way.

“AMOS is located outside the city of Liège in Belgium,” Chisogne explains. “We have the river Meuse almost outside our windows and can ship our equipment for satellites and professional astronomy anywhere via the harbor of Antwerp.”

We enter a workshop filled with people, huge devices, laptops, plans, and screwdrivers. The majority of the projects have been running for many years, Chisogne says. The Indian project, for example, has been ongoing for six years. He gestures to a 12-foot-wide liquid mirror that is mounted in the workshop. Unlike the mirror used in Chile in 2004, which was made of glass and was almost flat, this mirror, part of the newest generation of telescopes, looks like a giant bowl and will be filled with 880 to 1,320 pounds of mercury. The advantage of a liquid mirror is that, compared to a glass mirror, it takes a couple of months instead of years to be manufactured.

Considerably smaller are the telescopes AMOS designs and manufactures for satellites and space shuttles. The telescopes made for ESA (the European Space Agency) and NASA (the National Aeronautics and Space Administration) weigh just over four pounds. Always the challenge is to make the instruments as light as possible because it costs almost $600 per ounce to send materials into space.

“Until now our clients have been noncommercial – institutes, universities and astronomy centers – but lately discussions have started with owners of telecom satellites who are interested in testing equipment in our vacuum chambers that imitate the outer space environment,” says Chisogne.

These vessels, which are made to simulate flying pressures and temperatures, can be more than 20 feet high and almost as wide. The thermal panels can accommodate temperatures ranging from –452 to +212 degrees Fahrenheit. Fake stars can also be simulated. With a collimator (another AMOS product, similar to a reverse telescope) a light source is created that behaves like a star. By using a collimator, certain measures can be taken to adjust data picked up in real space that are used to, for example, estimate the mass of a star.

Thus there is still 96 percent to discover. “Unfortunately there is not a lot of margin in this for commerce, and therefore it does not attract many players,” says Chisogne. “I think the market will remain more or less like it is today
for many years.”