» The spirit of cooperation 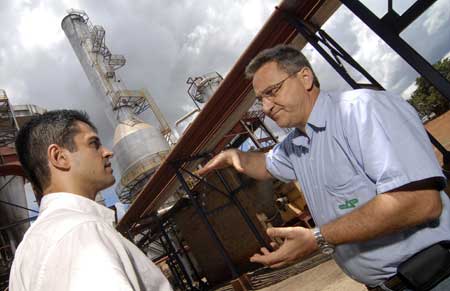 The spirit of cooperation

“Great things areaccomplished by a series of small things brought together.” This quote, attributed to Vincent Van Gogh, sums up the simple moves by SKF do Brazil and one of its top authorized distributors, Durão, to boost sales and future prospects in the sugar-producing region of the Brazilian state of São Paulo.

With the growing global demand for bio fuels, Brazilian sugar mills and alcohol refineries are expanding production of ethanol at a rapid clip. The 1964–1985 military dictatorship provided incentives for ethanol production in reaction to the oil crisis of the 1970s. For a time in the 1980s the bulk of the Brazilian automobile fleet ran on ethanol, but as oil prices came down the civilian politicians who followed the military regime reduced subsidies, and petroleum made a comeback. Even so, ethanol con-tinued to be used as a high-volume additive to Brazilian gasoline. Today, the Brazilian market is dominated by flex-fuel cars that can run on ethanol, gasoline or any mixture of the two.

Pitangueiras Açucar e Álcool, a sugar mill and biofuel distillery almost 200 miles north of the city of São Paulo, was founded in 1975 to produce cachaça. This is the sugar cane spirit best known as the main ingredient of caipirinha, Brazil’s national drink. The family-owned business moved into rubbing alcohol and ultimately a combination of ethanol and sugar. When the company began its milling operations, it processed 45 tons an hour. Today, it handles almost 500 tons an hour.

In 2004, Pitangueiras Industrial Manager Gilmar Galon was preparing to install a new boiler to increase steam production, and he needed a better performance from his industrial fans.

Durão Director Wagner Pizzorecommended including SKF’s self-aligning bearing system, incorporating a CARB toroidal roller bearing, and surrounded it with other SKF parts and services, thus creating a special SKF concept or kit. Galon liked the idea, but as he was committed to buying his fans from LCI, an up-and-coming Brazilian manufacturer of industrial fans, he told Pizzo that he would have to persuade the fan manufacturer to go along with the scheme.

At LCI, Pizzo found a kindred soul in company co-founder and director Luis Carlos Iuras. “This relates to my idea of how to live,” says Iuras. “I believe in treating clients with respect, fairly and honestly, and I’ve always wanted to work with the best technology possible.”

Customers have long favored SKF bearings. But to cut costs they have often surrounded them with equipment produced by competitors. This has led to premature failure of the bearings and housings. Average product service life has remained frustratingly low – about two years from installation to replacement. Everyone considered this normal. “I have had a lot of problems over the years because there was no solution like the SKF concept,” says Iuras. “Before I thought we just had to live with it.”

When equipment failures or other problems force production to a halt, even for a short period, losses can be considerable. Thus, reliability and maintenance are critical.

The SKF conceptaccommodates thermal expansion of the shaft, operates with low vibration levels and is less sensitive to unbalancing. As a result, the equipment is projected to last at least twice as long as the one previously in use. The first concept kits went online in 2005 at Pitangueiras and other facilities, and they’re all still on the job. “We had an unpleasant surprise,” says Pizzo with a smile. “After two years we haven’t had any replacement orders. We usually start to get them after a year.” Noted Galon at Pitangueiras: “Ours have gone through two harvests so far. The old systems usually held up for two or three harvests. But we’re hoping that these can go as far as 10 harvests.”

Other benefits for the customers include the elimination of the need for relubrication and a lower need for maintenance. “We’ve had less maintenance, and we haven’t had the problem of stopping to put new bearings in place,” says Galon. According to Iuras, LCI has been able to cut costs by scaling back its repair crew from three to two, without loss of quality.

Given the cyclical nature of the crop that serves as raw material, most mills close down completely for a few months each year – a time they use to perform extensive maintenance. For bearings, however, the shut down period creates a special problem, says Galon. The humidity is always there, due to the weather. “Bearings have to be constantly in use to avoid the humidity from entering, which leads to corrosion,” he notes.

Some leading mills have already gone to year-round production, and others, including Pitangueiras, are preparing to follow suit. That will reduce the rust problem identified by Galon, and it will further test the durability of the equipment. “Now, with the increased demand from abroad, we have to adjust,” says Galon.

In the spirit of the “More with SKF” program, designed to intensify relationships with authorized distributors, SKF Authorized Distributor Durão took SKF’s self-aligning bearing system, incorporating a CARB toroidal roller bearing, and surrounded it with other SKF parts and services, thus creating a special SKF concept or kit.

The concept would provide better performance, a lower need for maintenance, greater durability, and – it was hoped – stronger customer loyalty for the replacements that will inevitably be needed later. Durão also forged a partnership with LCI, a Brazilian manufacturer of industrial
fans. LCI is installing the kit as standard equipment on fans destined for quality-conscious clients.

“The SKF concept is nothing more than putting the right SKF products and services together,” says SKF engineer Nelson Alves Pereira Jr.

In a market often dominated by short-term budget considerations, SKF and its distributors need to make a strong case about the long-term cost savings of the concept. “We can’t escape the fact that our prices are higher,” says Pereira. “If we can’t convince customers that we have a value-added proposition, they will go elsewhere.”

To bolster that effort, SKF uses a computer program called DSP (Documented Solutions Program) that helps calculate future savings for customers. “We take the customer’s operational numbers and demonstrate how their labor and lubrication costs will be lower if they use our products and services.”

Now the SKF concept is being taken into other sectors. “We identified a need and created a solution in the sugar and ethanol sector, but the idea isn’t exclusive to any one area,” says Durão Director Wagner Pizzo. “We will provide it for steel, mining and other areas. The potential is great.”