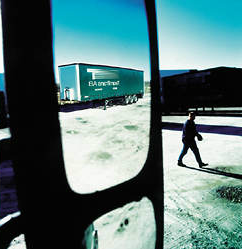 Trailers are normally behind their tractors, not only on the road but also in terms of technology. The latter is something Germany’s Schmitz Cargobull aims to change.

Trailblazing trailers
SKF has been making truck hub units for the non-driven wheels of goods vehicles since the mid-1980s, but they are only now catching on in the trailer world. The advantages are clear. By using an integrated unit, pre-greased and sealed at the SKF factory, manufacturers can be sure that the bearing is always optimally adjusted and that operators save on maintenance.
The truck hub unit used in the new axle was specially developed for the requirements of a trailer axle, which has to accommodate far higher turning forces than a truck’s front wheels.
SAF and Schmitz put their specifications out to open competition, and several manufacturers offered solutions.
“SKF was the quickest to offer us a solution that was ready to go into production,” says Johann Dantele, managing director of SAF. “SKF was also the first to get through the famous braking test run on Rossfeld Hill.” Schmitz has decided that SKF will be sole supplier for its ROTOS line.
SKF is profiting from the two companies’ successful idea. Initially it was anticipated that 40,000 truck hub units would be needed in 1999; that figure has since doubled.

Imagine the feeling of being a trucker – all that power under the bonnet, the big steps to get up into the cab, the long journey ahead, maybe across a continent. One man (or occasionally, woman) is in control of all that.
But, in most cases, the powerful bit up front is merely the means to an end. The reason for the whole operation lies in the trailer’s load. There’s no point to being a trucker if there isn’t anything to haul.
All the same, it takes longer for the latest technological developments to reach trailers and semitrailers than to reach trucks and tractor units. But a couple of recent major developments are making the trailer world sit up and take notice.
At the 1998 International Automobile Exhibition, all eyes were on Schmitz Cargobull trailers and SAF Otto Sauer Axle Factory. Both companies were presenting a new concept: Schmitz’s ROTOS and SAF’s INTRADISCplus shared the same axle and disk brake, although with different suspension systems. But the attraction was that both were offering a guarantee of 1 million kilometres or six years on their units. SAF coined the term the “Magic Million” to describe its offer.
The two companies, both of which have origins as village smithies in the 19th century, had cooperated to produce an axle that would break new barriers in reliability.
A couple of years ago, Peter Schmitz of Schmitz Cargobull, based in the village of Altenberge near Münster in northern Germany, was thinking about making his own axles. He wanted the German semitrailer market leader to lead the market further with a model featuring a new low-maintenance axle. Every operator knows that while a trailer or a semitrailer is in the workshop, it is not on the road making money.
“Certain developments meant that it might make more sense to enter this new field now than it did before,” says Thomas Naber, development engineer at Schmitz. “Several components had become much simpler. For example, disk brakes required about 20 parts instead of the hundred needed for drum brakes. And more and more manufacturers were making complete units for components like brakes or bearings.”
Peter Schmitz thought the company should be able to put together the best units from the best suppliers and offer a whole trailer from one manufacturer.
SAF, based in the southern German village of Bessenbach near Aschaffenburg, is the German market leader in disk brake trailer axles. Schmitz chose SAF to supply the raw axles for the new project. Johann Dantele, managing director of SAF, recalls: “It quickly became clear that both of us were thinking along similar lines about the need for a low-maintenance axle. We were both after the same marketing idea: to feature a bearing with a million kilometres guarantee.”
Schmitz had already been in touch with SKF, whose truck hub unit had basically solved the problem, but the truck hub unit was only in use in trucks and not yet in trailers. It also was clear that many other ideas that were standard in truck design would have to be adopted in the semitrailer. Disk brakes, by now common in tractors, would allow better braking, but also better compatibility with the modern electronic braking system on the tractor.
The use of disk brakes led to the adoption of the 120 millimetre wheel offset, with the wheel fixed at the outside edge of the hub, as is usual on cars, instead of in the middle of the hub, as in conventional trailers. That means the brake unit can be protected by being tucked inside the wheel.
By using the truck hub unit and the 120 millimetre offset, it becomes possible to remove the disk without disturbing the bearing. In addition, the same spare tyre would do for both the tractor and the trailer, saving a good 60 kilograms.
All this meant new reliability and cheapness of operation. Everything would be put together and undergo final adjustment in the factory. The operator would only have to replace parts that wore out, such as brake blocks, and would never have to repair or adjust anything. The concepts of SAF and Schmitz were so similar that Peter Schmitz took a bold step. He asked SAF to make the whole axle unit to specifications worked out between them. That meant that SAF would offer the axle on the open market, as well as supplying it to Schmitz.

Bringing it all together
Naber says that Schmitz, as a trailer manufacturer, sees its role as bringing together the best component suppliers to provide what it calls the first complete Running Gear System, including axle, brake, suspension and hydraulic system. It boasts the names of the suppliers on its publicity, since it knows that they are names to conjure with – they include not just SKF and SAF, but also the brake manufacturer Knorr, Wabco for the electronic braking system and Alcoa for the optional stylish, weight-saving wheel rims. Schmitz’s own contribution is the coordination of the whole ROTOS project, the assembly and the suspension system.
Schmitz’s Multi Ride Height suspension system is unique in that, in conjunction with Schmitz’s FLEXOS trailer body, it allows an adjustment of 200 millimetres in ride height. This enables operators to adapt their trailers to different coupling heights and maximise their loading volume – and volume, for the operator, is money.
Schmitz receives its axles from SAF fitted with the SKF bearings and the Knorr brakes, ready to be made up into the ROTOS Running Gear System. SAF’s own version of the axle, the INTRADISCplus, features a different suspension system, which is unique in its own way. Most suspensions, including the ROTOS, are attached to the axle with a U-bolt. However, the INTRADISCplus is attached by steel sheet welded directly to the axle, providing the stability that is at the heart of SAF’s Magic Million guarantee.
Both SAF and Schmitz have been surprised by the resonance their development has had in the industry. Schmitz’s Naber says the company originally forecast that ROTOS would end up being about 15 percent of its production. ROTOS now represents 30 percent.
SAF’s story is similar. A new factory has given it the necessary capacity for the sudden increase. SAF’s Dantele says that the objective of the development was to reduce life-cycle costs, and the strategy seems to be paying off. SAF’s Magic Million has made forecasting costs more reliable, and Dantele’s next objective is to provide the same guarantee on the brakes.